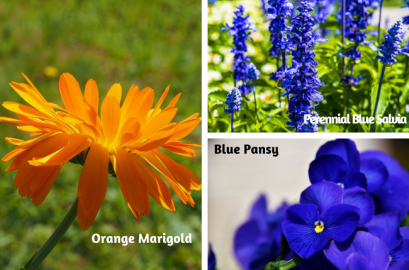 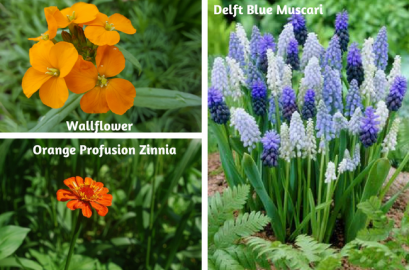 At first glance, blue is not a color that most people would associate with the fall but I thought differently after my morning walk today. Looking up I saw a clear blue sky and was immediately drawn to the orange leaves of my neighbor’s maple tree which stood out against that blue backdrop. I also saw an orange pumpkin waiting to be carved for Halloween surrounded by pretty blue pansies. Finally, the orange glow of my Bright Lights Cosmos was only enhanced with the blue sky in the background. It isn’t hard to see that the colors blue and orange seem to almost be made for one another and can make for a spectacular container garden.

As a reminder one simple container gardening recipe is to combine spillers, fillers, and thrillers together:

Spillers - They are found at the edge of the container and are designed to cascade toward the ground.

Fillers - They tie the container together as they are planted between the spillers and thrillers. They are taller than the spillers but not as tall as the thrillers would be.

Thrillers - They are the star of the show and are attention getters. They often have dramatic flowers or colorful foliage.

Here are some blue and orange plants to grow in partial to full sun conditions:

Here are some suggestions for containers that include brown and white plants that will be situated in partial to full shade conditions: