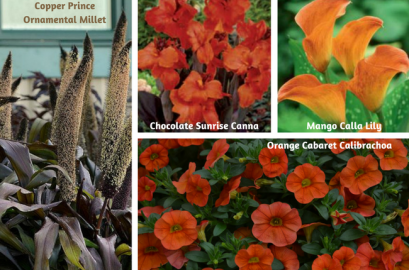 Anyone who knows me well will tell you that I don’t back down from a challenge. On the surface writing an article about combining the colors of orange and brown is something you would do in October, not in April, but bright orange and chocolate brown combinations are just as pretty during the entire growing season as they are at the end of it. Add a splash of white to your pots of orange and brown and you’ve got a unique container combination that you won’t see everywhere! Don’t forget that if you can’t locate a flower that is orange or brown you can probably find a container in these colors as a substitute!

As a reminder one simple container gardening recipe is to combine spillers, fillers, and thrillers together:

Spillers - They are found at the edge of the container and are designed to cascade toward the ground.

Fillers - They tie the container together as they are planted between the spillers and thrillers. They are taller than the spillers but not as tall as the thrillers would be.

Thrillers - They are the star of the show and are attention getters. They often have dramatic flowers or colorful foliage.

Here are some orange and brown flowering plants to grow in partial to full sun conditions:

Here are some suggestions for containers that include orange and brown flowering plants and will be situated in partial to full shade conditions: