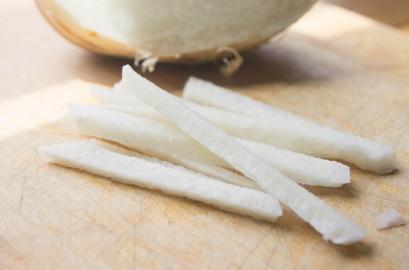 Some chefs say that Jicama is the most exciting vegetable that we’re not using in the kitchen. As a matter of fact, I never heard of jicama (pronounced Hik-Uh-Mah) until I started watching the Food Network years ago. It seemed like every chef on that channel was using this root vegetable in dishes ranging from salads to stir-fries. Jicama is also known as Mexican yam or Mexican turnip, but it is actually a member of the bean family. Its popularity is growing due to its versatility and nutritional value. It is packed with fiber and at 49 calories per cup with no fat it is a dieter’s best friend. It is also a good source of calcium and is said to taste like a cross between a pear and a potato. It can be eaten raw or cooked, but its skin is poisonous so you need to be sure to peel it before you eat it!

Jicama is a vine that can grow up to 15 feet or taller if given the right support. You can even use it on a trellis to shade other plants or to cover the wall of a shed or other structure that you might want to hide. The larger tubers are obtained when this vine is allowed to grow for at least 9 months. This means it is better suited for warmer garden Zones 10 and higher, but it is possible to grow it in colder zones that get at least 5 months of frost-free weather. In these cooler zones the tubers will be smaller. It is also possible to start the seed 8 to 10 weeks prior to setting the plants outdoors, but the seed does require warmth to germinate. Placing the potted seed on top of an appliance like a refrigerator should provide the additional warmth that is needed for the seed to germinate.

Once the danger of frost is past in the spring you can set the jicama plants out in rich, moist soil that drains well. It will require fertilizer with an emphasis on potassium to create the ideal soil conditions needed for this plant. Another positive attribute of this plant is that it is relatively pest-free and doesn’t require a lot of additional TLC. You want to be sure to harvest the tubers before the first frost in your area. The tubers can be injured while digging them out so you want to proceed carefully with this task. You can put the tubers out for a few hours in the sun and then brush off the dried dirt that remains on the tuber, but don’t wash the tuber until you are ready to consume it.

Storage can be a little tricky as temperatures below 50 degrees can damage the tuber. This means that a refrigerator is not the best place to store them, but they can be placed in an unheated basement or garage for up to two months after they are harvested. Finally, if you don’t have growing conditions that allow you to successfully grow jicama to the point of being able to harvest the tubers you might consider growing this interesting plant as an ornamental vine in a flower bed or even a container.

Now that you know all about jicama you can start to use this increasingly popular vegetable in your kitchen!