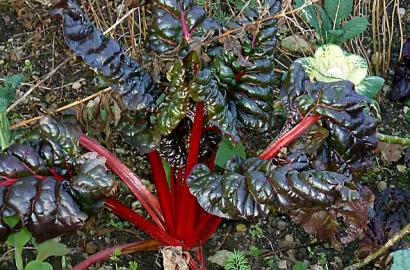 Rhubarb is a classic springtime vegetable finding its way into everything from pies to jam. It is a good source of vitamin c and calcium and can also be a colorful addition to dishes with other popular spring vegetable favorites, including asparagus and peas. It resembles celery in appearance and just like celery you want to select and harvest stalks that are firm and rigid. Its leaves are highly toxic and should be discarded, but the stalks have a tart and tangy flavor. The stalks can be eaten raw, but it is highly recommended that they be cooked with a sweet partner like strawberries, sugar or maple syrup to tone down that tart and tangy flavor.

Rhubarb is a long-lived perennial vegetable that can remain productive for up to 10 years when it is planted in favorable growing conditions. The leafstalks grow up to 22 inches long and can be red and green in color. Field-grown rhubarb typically has a deeper red color and is generally available through June. Rhubarb that is grown in a hothouse has a lighter pink color and often has green speckles. It is typically available through September, but its flavor is said to not be as robust as field-grown rhubarb. Rhubarb can also be cut into 1 inch pieces and frozen for up to 12 months, but be sure not to thaw them out as this can cause them to lose their shape.

Rhubarb prefers rich, well-drained soil in full sun to partly shady conditions. It is grown from roots rather than seeds and the roots should be planted in early spring about 3 feet apart with the tops about 2 inches below the soil line. If a seed stalk does develop it should be removed as it will sap strength from the plant. The plants should be fertilized in the spring and mulched heavily to ensure it remains moist during drier conditions that will occur during the growing season. It prefers climates with colder temperatures and will not perform as well or be as long-lived in the warmer areas of the country.

Like asparagus, rhubarb stalks should not be harvested until the plants are at least 2 years old to ensure the plant gets off to a healthy start. The first harvest should only last for about 2 weeks, but once the plant is three years old you can harvest the stalks for up to 6 weeks. You should leave unharvested at least 1/3 of the stalks each year to help the plant maintain its vigor. As mentioned previously the leaves should be discarded as they are toxic, but you should also refrain from harvesting stalks that are frozen as the toxins can actually make their way into the stalks under these conditions.

Finally, many cooks recommend that rhubarb be roasted as it helps it to maintain its firmness while also bringing out its red color. However, it is important to not cook rhubarb in iron, aluminum or copper cookware as the acid in the plant will darken the pan and cause the plant to take on a very unappetizing brown color. Now that you know all about “red-hot” rhubarb maybe you should try growing some in your garden this spring.