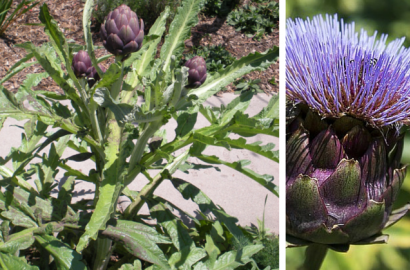 The first time I was introduced to artichokes was while watching an episode of The Little Rascals. I know I am showing my age! During the episode the characters are served artichokes and one of characters, not knowing exactly what an artichoke was states, “Well, it might have choked Artie but it won’t choke Stymie”! My next encounter with artichokes is really what served as the inspiration for this article.

During the fall I took a weekend trip to Williamsburg, Virginia and spent the day in Colonial Williamsburg. Of course, being the gardener I am, I was drawn to the vegetable garden at the Governor’s palace and came across a rather large plant with silver to gray leaves that I could not identify. After doing some searching I found a marker that confirmed it was an artichoke.

I was very surprised not only by the interesting color, size and texture of the leaves but by the fact that artichokes were actually grown there at all. I’ve always associated it with areas like coastal Northern California where summer temperatures are cool, winters are mild and moisture is plentiful. It turns out that artichokes are actually perennials when grown in mild-winter areas but they can also survive in cooler climates if they are provided enough protection. This protection can be in the form of heavy mulching or if you have the plant in container you can move it to a protected area like a garage.

Artichokes are heavy feeders and require nutrient-rich soil enriched with compost, manure and other organic matter. They are related to the thistle family so they require well-drained soil as well. When the buds form they can become tough if the weather is warm so it is important to provide a good mulch to maintain even levels of moisture in the soil. These plants become quite large so you’ll need to make sure you give them lots of room to grow and if you’re growing multiple plants you’ll need to space them about 4 to 6 feet apart.

Artichokes are susceptible to attacks by aphids and slugs so you’ll want to check them regularly for signs of holes in the leaves or large numbers of ants which often use aphids like farm animals and harvest the “honeydew” left by the aphids. These pests won’t overwhelm the plant but the can weaken it which might impact the production of the buds as well as impact its longevity particularly if you are growing them in garden zones 7 or lower. Once the buds get to be about the size of your fist they are generally ready to be harvested. The outer layers of the artichoke are known as bud scales and they are edible but the real tasty part is the center which are often used in salads or as a stuffing for meat and fish.

Finally, while artichokes are grown primarily because they are edible they can also make dramatic plants in your landscape. Their size and the color of their leaves are eye-catching enough but if the buds are not harvested they will eventually flower with impressive looking 6 inch blue blooms that can also be good for drying. If you are looking for a plant that will make people stop and take notice of your garden than I would suggest you give artichokes a try!