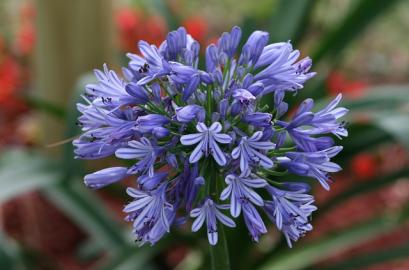 Agapanthus is a flowering tender perennial with a long history of confusion surrounding where it originated from and what family of plants it is related too. It also goes by the name Lily of the Nile yet it is not indigenous to the Nile River basin. In fact, it was first brought back to Europe in the late 1700’s from South Africa and in the U.K. it is called African Lily. It was originally included as part of the Lily family and then was said to be related to Amaryllis. It then was moved into the Onion family and finally was given its own classification. Talk about an identity crisis!

It is easy to see why there has been so much confusion about this plant. Agapanthus flower buds do resemble plants in the onion family such as Chives. Once the flowers open they resemble some varieties of Allium bulbs which are also related to the Onion. The long stems resemble those of a Daylily and the strap-like leaves are similar to those of an Amaryllis but there seems to be one characteristic that most gardeners do agree upon; their flowers can be spectacular!

Agapanthus is a versatile plant. It can be grown as the edging to a flower border and some dwarf varieties are particularly good as container plants. As a matter of fact, the more restricted the root growth is in the container the more flowers you get! The flowers are typically blue to purple in color although there are some white colored varieties as well. The color blue is not easy to find in a garden so this makes Agapanthus an even more desirable addition to your yard.

Although there are varieties of Agapanthus that can survive in colder garden zones such as zone 7 most varieties are sensitive to frost and unless you live in a state such as California they are often best treated as an annual plant. They bloom in the early summer in most areas of the country but in warmer climates, the blooming season is extended into the late summer. The flowers look attractive in an arrangement and they are good companion plants to Daylilies. Yellow flowers such as Marigolds and Lantana look especially attractive when mixed with Blue Agapanthus.

When planting Agapanthus you will want to choose a particularly sunny location. The number one reason that Agapanthus won’t bloom is that they are not getting enough sunlight. They should be planted 8 inches apart and just deep enough to cover the roots. The soil also should drain well as they don’t tolerate overly wet soils. It makes you wonder how they got the name Lily of the Nile, doesn’t it? They also don’t need to be fertilized as too much fertilizer will get you a lot of leaves and not as many flowers.

Finally, in the fall it is possible to treat Agapanthus as you would a Canna or Dahlia. You can allow the foliage to be killed by the first frost, dig up the tuber and store it in your basement or warm corner of the garage. This may allow you to replant the Agapanthus tuber next spring. If you are growing it in a container you can move the entire container indoors. Allow the container to dry out and then water sparingly during the winter. Once temperatures begin to warm up in the spring you can then move the container back outdoors again.

While Agapanthus may suffer from a bit of an identity crisis there is no doubt about how this plant can enhance the beauty of your yard!