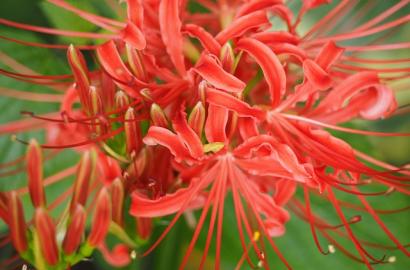 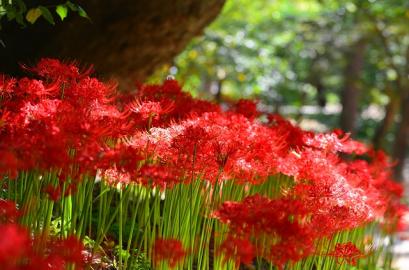 I don’t think I’ve ever seen a bulb that had more names than the Spider Lily. Their real name is Lycoris but they are also known as Resurrection Lily, Cluster Amaryllis and in the Southern United States they are called Hurricane Lily. Spider Lilies are native to Southeast Asia. At some point, they were imported to North Carolina and naturalized from there. Regardless of what you might call them, Spider Lilies are a unique bulb and as their name suggests they can sneak up on you in the garden just like a spider does in its web.

While Spider Lilies are planted in the fall but they won’t actually bloom until about a year after they are planted. Starting in the winter its daffodil-like leaves emerge only to disappear by late spring. They remain dormant until the late summer when a leafless stem appears topped by a pretty pink or red flower that looks very similar to an Amaryllis. Their appearance is most welcome as they bloom at a time of the year when a garden is in transition from summer to fall and in need of some color.

Spider Lilies grow 18 to 30 inches high and grow their best in garden zones 5 through 8. They prefer soil that drains well and sunny locations although they can tolerate some light shade. The bulbs should be planted 3 to 4 inches deep and 6 inches apart. They will multiply over time and if you want to move them to other parts of your yard the best time to dig up the bulbs is in the spring when the leaves begin to yellow and die back. They can be used in containers as well as flower beds and their blooms make an excellent cut flower as well.

The Spider Lily is extensively cultivated in China and Japan where it is used as a decoration in many festivals and celebrations. They also are often planted near the borders of rice paddies to provide some color during the summer months. These plants take on a more ominous role in Chinese legends as they often grow near cemeteries. Their red color is associated with hell and they are said to be guides for the dead to find their newly reincarnated souls.

So, if you decide to plant Spider Lilies in your yard this fall I’m betting that once they bloom you’ll never forget where you planted them again!