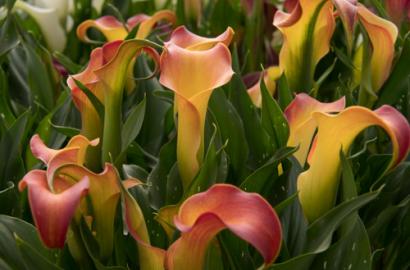 I truly enjoy the research I do when writing content for our website. I learn a great deal from the process and find out so many interesting things about the plants I write about. The Calla Lily has proven to be no exception. Due to the unique shape of its flower, it has few rivals in terms of the dramatic display it can put on in the garden. However, what I am about to share with you adds a whole new layer of drama to this flower.

The Victorian era of the 19th century was one filled with very strict social codes. Public displays of affection, for example, were greatly frowned upon and expressing one's feelings often had to be done in unique ways. Flowers were often considered to be the best way to do this and like other flowers of this period the Calla Lily took on special meaning. The Calla Lily was given to another person when you were expressing your passion for them. As a matter of fact, Sigmund Freud assigned sexual overtones to this plant and it developed a very risqué reputation.

Calla Lilies actually grow from rhizomes which is similar to the Iris although they have no relation to one another. They are indigenous to Africa where they thrive in the wet ground found in marshy areas. Here at home, they have been bred to do well in normal garden soil that is moist but well-drained. They prefer sunny locations but will benefit from some shade in the afternoon in particularly warm garden zones. They are striking in containers or flower beds and are an excellent cut flower.

Unlike Iris rhizomes which are planted at the soil level, the Calla Lily should be planted 4 inches deep about 12 inches apart. It has been reported that Calla Lilies are hardy in garden zones 7 through 10 but I have found that in garden zone 7 they need to be planted in locations that are warmer and drier in the winter such as a Southern exposure or near a wall that radiates heat. Otherwise, they should be dug up in the fall and treated like a Dahlia or Gladiolus which can be wintered over in a cool basement or garage and planted again the following spring. The rhizomes need to be dried out as they can easily rot if they are damp.

Callas grow up to 3 feet tall and can produce anywhere from 6 to 12 blossoms. They come in a wide array of colors and we’ve found that red, yellow, orange and particularly black have been very popular. Some varieties have evergreen leaves while others have speckles or spots. They are typically not bothered by pests and are considered deer-resistant. The leaves sometimes get a leaf-spotting fungus but you can simply remove these infected leaves.

If you are looking to spice up your garden next summer than the racy Calla Lily might just be for you.