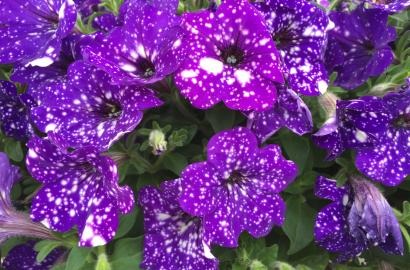 No one can deny that the petunia is one of the most popular annual flowers of all time. Its beauty is only matched by its versatility. Whether it is used as a bedding plant, groundcover or spilling out of a container or hanging basket this plant keeps gardens in bloom from spring through fall. Petunias were first discovered in South America and brought back to Europe early in the 19th century. Documents suggest that the first petunias were not noteworthy, but once breeders in England and Germany got their hands on this plant larger flowers and a wider array of colors soon followed. The beginning of the 20th century saw the introduction by Japanese breeders of the first consistently fully double flowered petunia and we were then on our way to the beautiful petunias that we enjoy today!

Petunias are actually members of the nightshade family whose relatives include tomatoes, peppers and nicotiana also known as flowering tobacco. They come in just about every color you can think of including black and blue which are colors that are rarely seen in many plants.  You can also find petunia flowers that are bi-colored as well. There probably are dozens of ways to classify the different types of petunias, but they can fall generally into the following categories:

• Multiflora-These flowers can be single or double and are produced all season long. They are great in window boxes, containers, and in mass plantings.

• Grandiflora-These were the most popular variety of petunia until the wave series was introduced in the 1990’s. Like all petunias it is a good choice for hanging baskets and containers, but this variety does better in cooler temperatures as high heat tends to cause the flowering to taper off.

• Floribunda-This is basically a variety of improved multiflora petunias. Its flower size is somewhat bigger without losing the prolific blooming habit of the multiflora petunia. These are better resistant to adverse weather conditions such as heat and wet spells than their multiflora cousin.

• Milliflora-This is a new variety of petunia also known as the fantasy series. The flower size is considerably smaller than a typical petunia, but the plant is literally covered with blooms. Unlike other petunias they don’t need to be cut back to rejuvenate their blooming process.

Petunias are sun lovers, preferring up to 6 hours of sun a day, but they also will tolerate shady conditions where they may not bloom as prolifically but their color is of great value. Gardeners in the South and Southwest will find that petunias appreciate a little shade during the hottest hours of the day. They are not particularly finicky about the soil conditions other than the soil not remain constantly soggy. Too much water will kill these plants.

While you will have no problem finding petunia transplants in the spring they are also very easy to grow from seed. Petunias seed themselves year after year so I never have a shortage of plants to spread around and tuck into open spaces in the garden. The seed is very small, even smaller than the size of a poppy bagel seed, and does require light to germinate. When planting petunia seeds I just empty the seed packet contents into the palm of my hand and shake my hand over the area that I want the plant to grow. I water the seeds and that is it. Once they get going just provide your petunias some fertilizer every 2 to 3 weeks and you’ll have blooms in no time. So, don’t forget, now is the time to harness “the power of the petunia!”