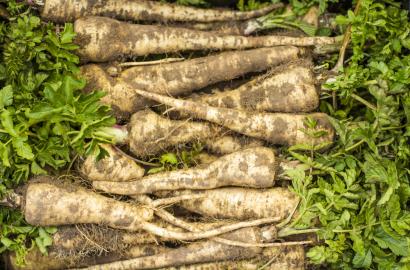 Parsnips were grown in ancient times for their sweet roots. They look like white carrots. Parsnips are native to Europe but they are grown throughout the world. Even the ancient Romans grew them.  It has been documented that Emperor Tiberius liked them so much that he would import them from France because they tasted sweeter due to the cooler temperatures in the region. The British also liked them and brought them to North America in the early 1600s. It became a popular vegetable because of its hardiness in extremely cold weather.

George Washington and Thomas Jefferson grew them, but they were consumed during colonial times by all people because they took very little effort to grow.  They were also simple to prepare. People would mash or boil them and serve them with butter.  In the 19th century, potatoes grew in popularity because they were easier to cultivate and Parsnips fell to the wayside.

Although considered biennials, they are typically grown as an annual vegetable.  They are grown from seeds and take a long time to mature.  Parsnips are a hardy, cold weather vegetable and typically planted in the spring or fall.  Use fresh seeds as viability typically decreased after one year.  Sow your seeds as soon as the soil is workable.  Plant them ½ deep, thin seedlings to 4-6 inches apart.  The rows should be anywhere from 18-24 inches apart.  Water the plant in the summer if rain is less than 1 inch per week.

If you plant your seeds in the spring they will take about 16 weeks to mature.

You will know when it is time to harvest because the leafy tops reach around 3 feet tall.  You will have a summer crop that can be harvested in the fall. Lift them in the late fall after they have been exposed to several moderate freezes. You can also leave some of the parsnips in the ground until spring but put soil or mulch on the plants to insulate the roots for the winter.  Harvest them in the spring right after the soil thaws.  You will find these parsnips to be sweeter than the fall harvest.