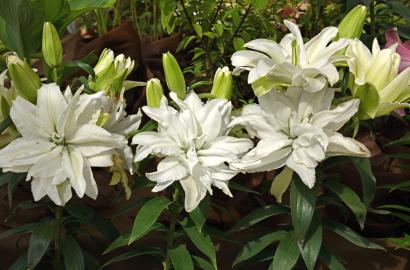 Lilies are a beautiful addition to any garden with their gorgeous flowers, and with many fragrant varieties. They come in a variety of colors, heights, and blooming periods so there is something for everyone.

Lilies have a long history dating back to 1580 BC when images of lilies were found in a villa in Crete. Their name came from the Greek word “leiron”, which was believed to refer to the white Madonna lily. These flowers also have a role in mythology as the Greeks believed that they came from the milk of Hera, the queen of the gods.

Lilies are considered one of the most beautiful and popular flowers in the world.  While there are over 90 species, some of the most popular are Asiatic, Aurelian, and Oriental. Some of the more popular lilies are Stargazer, Casa Blanca, Easter, and Tiger. They are a top-selling-cut flower because of their long-lasting blooms, variety of flower shapes, and colors.

Double Flowering describes varieties of flowers with extra petals. At first, double flowers were documented as an abnormality.  Today many flowers are bred to have extra petals.

While double-flowering lilies have been around for a while, they are not all the same. The Roselily series was started nearly 30 years ago. These oriental lilies have at least 18 petals compared to just six on a single oriental lily. The name comes from the flowers looking like roses when they open. The plants were bred to have a sweet, mild fragrance, but they will not overpower a room if used as a cut flower. One of its other advantages is they are pollen-free. Since they do not produce pollen, they have a longer shelf life.

Roselily breeding started in 1993 and was conceived by De Looff Lily Innovation in the Netherlands. Roselily became a registered trademark in 2012 and four years later worldwide distribution started. They were the first pollen-free double flowering lily on the market.

The key features of these lilies are:

Along with flowers that can be grown in your garden and used for cut flowers, the company has developed a specific assortment of double-flowering lilies to grow in containers. The potted lilies do well on your balcony or patio in the summer months and can be enjoyed indoors and out.  The Roselily Sita bulbs we sell are potted lilies. They come in various shades of pink and white.

Next time you want to grow some lilies why not give Roselily® Lilies a try!