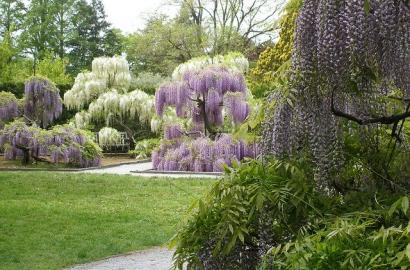 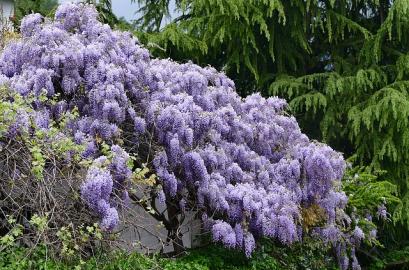 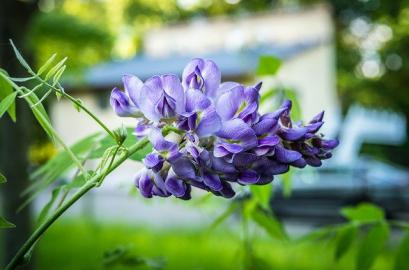 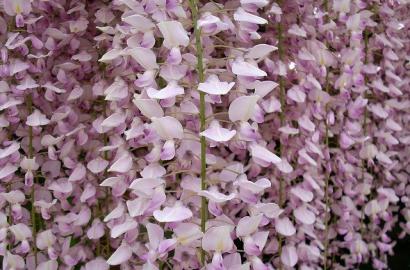 Wisteria is a large, vigorous growing vine that requires a strong structure to support its weight. It produces a spectacular show of spring flowers in long grape-like clusters with color variations that range from violet to blue. Some varieties have flowers that are fragrant while others are fragrant-free. There are varieties that are indigenous to North America. Their growing habits are far less aggressive than their Chinese and Japanese cousins which were brought to the continent early in the 1800s and are considered an invasive species in the Southeastern U.S.

Wisteria grows best in sunny locations, but it is not uncommon to see vines growing more than 30 feet in length weaving their way through a canopy of trees. They are tolerant of an array of soil types but do best in fertile soil that is evenly moist and drains well. Fertilization is generally not required and often leads to even more aggressive growth in the vine itself and much fewer flowers. A layer of compost and mulch to retain moisture should do.

Every year, after the plant has bloomed, it should be aggressively pruned in order to keep its growth in check as well. Flowering only will occur on new growth so it should be pruned again late in the winter. The stem should have several buds on it with the cut made just above one of these buds. Wisteria is capable of causing severe damage to structures if not properly pruned. Don’t plant it too close to your home! It needs to be planted somewhere that has a lot of room for it to expand.

Japanese Wisteria (Wisteria Floribunda) -This is the most widely planted species of Wisteria. Its flowers are lightly fragrant and are lavender-blue in color. The flower clusters can be up to 3 feet long. It is often found in Japanese paintings and pottery.

Chinese Wisteria (W. Sinensis) - This variety of Wisteria has flowers that are bluer in color and the clusters are far smaller; they are typically 6 to 12 inches in length.

American Wisteria (Wisteria Frutescens/Wisteria Macrostachya) - Both varieties of native Wisteria grow far less aggressively. They flower later in the spring after leaves have emerged on the plant as opposed to the Asian varieties which flower before foliage appears. The seed pods which emerge after flowering are smooth in comparison to the Asian Wisteria whose seed pods are fuzzy in texture. Blue Moon is a particularly hardy variety that grows in garden zones 4 through 9 and can withstand temperatures as low as minus 40 degrees.

Other Tips about Wisteria: