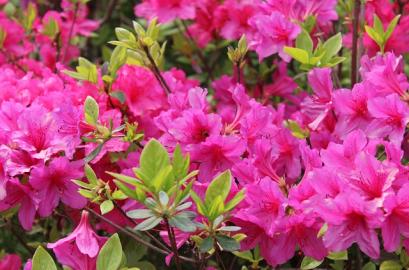 When I first got interested in gardening there were a few plants that really caught my eye and one of those was the Azalea. I call it the “look at me” shrub because when it is in bloom it steps forward and demands your attention. Even if you’re not a golfer tune into the Masters golf tournament this April, particularly if you have high definition television and I think you’ll know exactly what I mean.  The good news is that while they may look exotic, azaleas are pretty low maintenance provided you give them the right growing conditions.

Azaleas are native to Japan and were introduced in the United States in the late 17th and early 18th century. They are related to the rhododendron but differ in that the azalea has only one flower per stem while the rhododendron has clusters of flowers. According to the Azalea Society of America (www.azaleas.org) there are over 10,000 registered or named azaleas and this plant is celebrated in festivals around the world including Japan, Korea, Brazil and of course, the United States.

Azaleas bloom in the spring and in ideal growing conditions the blooms can last for weeks.  They prefer shady conditions such as are found under a tree canopy. Too much sun will burn their leaves but I have grown them in front of my home which has a Northern exposure without any shade protection. They require a soil that is acidic so you may need to feed them with a fertilizer made specifically for these plants such as Hollytone to provide them with this type of environment. The soil must also drain well as soil that retains too much moisture will kill the plant. I usually feed them right after they finish blooming but definitely before July 1st or you run the risk of having growth that will not be mature enough to take the winter cold and wind.

Azaleas typically grow from 2 to 8 feet tall and I can tell you from experience that the further north you plant them the slower their growth will be. In the Mid-Atlantic where I live I trim and shape my azaleas every few years but my family in North Carolina has to prune them annually or they will grow very large, very quickly. The timing of the pruning is important. You should prune azaleas right after they finish blooming. If you wait too long you’ll be pruning next year’s flowers off and that can be a big disappointment!

Most azaleas grow best in garden zones 6 through 8 but depending upon the variety you are planting that growing zone can be expanded to zones 4 through 10. If you are going to grow them in the colder zones 4 through 6 it is a good idea to provide them some protection, such as wrapping them in burlap, from winter winds. You also want to carefully remove any wet, heavy snow or their branches can easily snap under the weight. Azaleas come in a wide range of colors including pink, red, white, yellow and purple. In the past 15 years a new variety of azalea, known as Encore, has been introduced. This variety blooms in the spring as well as later in the season and it has a far greater tolerance for sun and colder temperatures. With so many varieties to choose from it is very likely that you can find an azalea to plant at your home this year!