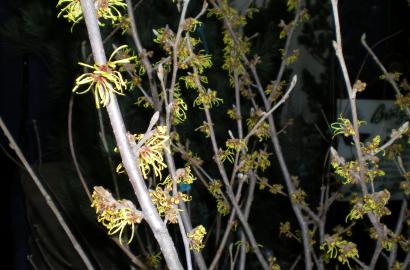 The first time I ever heard of witch hazel was when my grandmother used it to sooth the itching from the “no-see” bites that I would receive on my legs when I would visit her in Florida around Easter time. I never thought much about the name until I was driving through the city of Fairfax, Virginia toward the end of February one year and was surprised to see a row of striking yellow flowers. For gardeners in colder climates the end of winter seems to drag on for what seems like an entirety while we wait for spring to arrive and seeing such a bold color at that time of year definitely raised my spirits as well as peaked my curiosity to find out what could be blooming so beautifully at a time of year when every other plant was still in the midst of its long winter nap.

After a little research and a trip to my local garden nursery I discovered the name of the plant was witch hazel. It is the plant from which the astringent witch hazel, which is used to sooth bug bites as well as fight acne, is extracted. Witch Hazel is actually a deciduous shrub, which means it loses its leaves in the fall, and can even be grown into a tree. There are several varieties of the plant including one that is native to the Appalachian Mountains but it is the Chinese variety that has become the most popular due to the fact that it is such an early bloomer. Its name is derived from the English word “wiche” which means to bend. Witch Hazel was often used in early America as a divining rod because of its bending capability.

Witch Hazel can be grown in USDA Zones 3 through 9 and prefers soil that is generally moist but drains well. It is an excellent choice as a shrub to grow under a tree canopy as long as it does get some sun. In zones 8 and 9 it prefers a little more protection from the sun and the leaves will burn if it is not planted in the proper conditions. While it can grow up to 25 feet high witch hazel is not an unruly plant. It can be pruned to keep its shape as long as the pruning is done right after the flowering is finished. If you prune the plant too late in the season you’ll be cutting off next year’s flowers so you want to be cognizant of this.

As I mentioned previously the more popular varieties of witch hazel bloom very early in the spring with the blooms lasting up to 4 weeks. The flowers will even stand up to a late winter snow storm and they also can have a pleasant fragrance which is an added bonus at this time of the year. Since it blooms so early it is often mistaken for another early flowering shrub, forsythia and like forsythia you can cut the branches and bring them inside to force the flowers to open indoors. While witch hazel is grown primarily for its early spring flowers which can be yellow, orange or red it also provides a pretty display when its leaves turn to a golden yellow, orange or red in the fall.

It is possible to grow witch hazel from seed but you better be a patient soul as it can take up to 6 years for it to actually bloom. It is also not deer resistant so if you are in an area of the country where deer are a problem you may need to use some repellants to keep the deer from nibbling on it too much. This inconvenience seems like a small price to pay for a plant that gives us such beauty at a time of year that we may need it most of all.