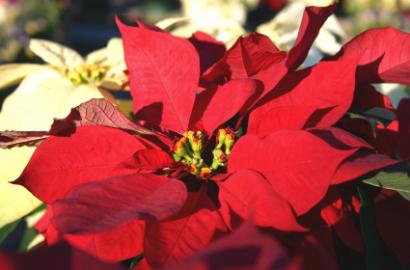 Did you know that 12/12 has been designated as National Poinsettia Day in the United States? No holiday plant is probably more deserving of such recognition. Starting around Thanksgiving and all through the holiday season Poinsettias dominate displays in office buildings, malls and of course churches. It is also by far the most popular holiday plant in homes across America and cultivating Poinsettias actually created an entire industry in the United States at the turn of the 20th century.

Poinsettias are indigenous to Mexico and Central America and were brought to the United States in 1825 by the first United States Minister to Mexico, Joel Roberts Poinsett, for whom the plant is named. The brightly colored bracts, for which the plant is known, are actually leaves and not flowers. While these bracts are traditionally red the past few years have seen the introduction of other colors including white, cream and even pink. While in bloom during the holiday season they should be kept in direct light and prefer to have their soil remain moist but not soggy. It is important to maintain temperatures of between 65 to 75 degrees where possible and to avoid drafty conditions which can cause the plant to shed its leaves.

Most Poinsettias are discarded once the holidays are behind us but did you know that it is possible to keep the plant and actually make it bloom again the following Christmas? It really isn’t as difficult as it may sound so maybe you should think about giving it a try! Here is what you need to do:
• After the holiday from January through March you will want to keep the plant watered to maintain its vigor.
• Starting in April you should decrease your watering, allowing the plant to dry out and move it to a cool basement or garage. The key is to make sure it will not be subject to frost or freezing conditions which will kill it. The loss of leaves during this time period is normal.
• Once the calendar turns to May you want to cut the stems down to about 4 inches in height. You may want to use a pair of gloves during this process as the sap from the plant can irritate your skin. You can also repot the plant at this time using a potting mix that will drain well. After the danger of frost is over you can move the plant outdoors for the late spring and summer. You should keep it in a partly shady spot and water it regularly so the soil does not dry out. Once the leaves begin to return you should begin fertilizing the plant every 2 to 4 weeks with a fertilizer made for houseplants.
• During July and August you may want to consider pinching the growing tips which means removing the growing tips so you promote branches and a more bushy plant.
•  Once September arrives you want to move the plant back indoors. You should check it for pests and insects before you do this and continue to water it during this time period.

Now that we’ve gotten to the fall this is when the process begins that will cause the plant to form the colorful bracts that we all know and love. While it may seem silly to do so, Poinsettias require a period of darkness to encourage their blooms to form. They will require a period of time where they spend 12 hours a day in complete darkness. Here is what you do:
• Starting in October you want to keep the plant in the dark from 5PM to 8AM the next morning. It is important that the plant be kept totally in the dark so if you use a closet it needs to be one that is not in a lighted area like a kitchen or hallway. A spot in your basement will work as well. During the daylight hours you can continue to treat the plant as you ordinarily would and continue to keep the soil moist. This process will go on until the last week of November.
• Starting in the last week of November you can bring the plant out of darkness and if things work properly the colorful bracts should appear. After December 15th you can stop feeding the plant and enjoy its beauty for the holidays!

If you have the patience and can provide the right conditions you can make your Poinsettia bloom again!