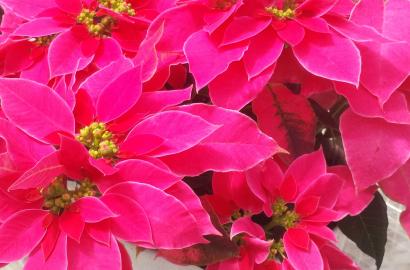 Just because it is December and winter is here doesn’t mean you have to put your love of plants in hibernation. As a matter of fact, the holidays can be one of the most enjoyable times of the year for “plant-a-holics” like us. Perhaps you’ve never thought about it but many plants and flowers play an important role in the holiday season and I thought it might be fun to write about some of them:

Poinsettia-No holiday plant list would be complete without the Poinsettia. It's red and green leaves are prominent in many Christmas floral displays and the last few years have seen the introduction of other colors such as pink and white.

Christmas Cactus-While they sometimes start blooming at Thanksgiving the Christmas Cactus is a popular holiday plant. They make great holiday gifts as they are low maintenance and relatively easy to grow.

Christmas Rose-While not actually a member of the rose family, the Christmas Rose symbolizes the tears that fell in the snow from a poor girl with no gift to give the Christ child.

Holly and Ivy-Holly is a popular plant used in wreaths and as a decoration to trim a Christmas pudding. Its leaves represent the crown of thorns that Jesus wore when he was crucified and the berries symbolize the bloodshed by Jesus because of the thorns. Ivy is considered a symbol of resurrection and eternity (If you’ve ever tried to eradicate it in your garden you know this can be true!)

Christmas Wreaths-Usually made of evergreens the tradition of hanging them may go back as far as ancient Rome. They are popular during advent; the time before Christmas that Christians celebrate the anticipation of the birth of Christ.

Mistletoe-Mistletoe is actually a parasite. Pagans used it to ward off evil spirits and to encourage spring blooms. It was first introduced as a Christmas plant in Victorian England where a berry was removed each time a couple kissed while standing under it. When the berries were gone the kissing was supposed to stop.

Rosemary-Small ornamental trees made out of rosemary, which is an herb, have become popular during the holidays. Rosemary is said to be the Virgin Mary’s favorite plant and it was thought that it could help ward off evil spirits. Rosemary is also known as the “remembrance herb” as this is the time of year that Christians remember the birth of Christ.