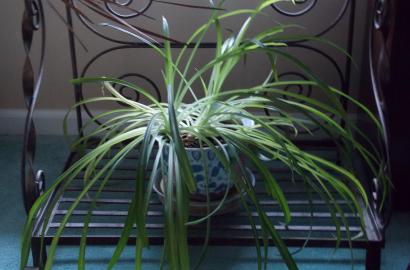 One of the most popular houseplants is the spider plant. While it has fallen out of favor in the last few decades because of interest in more exotic plants it remains one of the most versatile and long-lived houseplants I know.   I have two spider plants in my home which have been in the same pots for nearly 20 years. They are offspring of plants that I grew as a teenager! I water them, give them a little fertilizer once a month, prune the leaves and that is it. That is what I call low maintenance and if you are looking for a plant to be part of a hanging basket then you’ll be hard-pressed to find a better choice!

The spider plant is actually an herb that is indigenous to Southern Africa; where it is a perennial plant. Unlike other houseplants that are very sensitive to cooler temperatures the spider plant is capable of surviving temperatures as low as 35 degrees and has adapted itself to outdoor growing conditions in some areas of the United States, such as San Francisco. I grow them outdoors during the summer here in Garden Zone 7 and they continue to grow even into November until the really cold temperatures finally knock them out.

Spider plants are capable of enduring less than ideal growing conditions. For example, they prefer bright light but can do well in conditions ranging from partly shady to almost direct sunlight. I have grown them in a variety of places in my home including a southern facing window where I provide it protection from the direct sunlight by keeping the blinds closed. I also grow them outdoors in the summer as part of a hanging basket in the front of my home which faces north.  Additionally, while they prefer to be watered regularly, once established, they can go for extended periods of time without a lot of water and during the winter months, I water them only once or twice a month. Finally, while they appreciate being fertilized regularly during the growing season they also can do well without a lot of extra attention.

Spider plants are fast growers and they multiply quickly by producing what I call “babies” that hang from a stem connected to the mother plant. These smaller plants can be removed, plant them in a well-draining potting soil, and in no time you can increase your plant collection. In fact, these babies can be rooted in a glass of water, which is how I propagate them for planting outdoors in the spring. I collect the babies in January or February and place them in a glass of water. I change the water periodically and by the time April or May roll around they are rooted and ready to be planted outside. Didn’t I say growing this plant is easy!

Mature spider plants will produce small white flowers, but the plant is really grown for its foliage. The most commonly sold and well-known variety is variegated with a green and white stripe. There is a lesser-known variety that is pure green and produces babies just like its variegated cousin.  If all of these features aren’t enough spider plants are on the list of plants that help improve indoor air quality and they are particularly adept at removing formaldehyde from the air. It’s time that this plant made a comeback so if you don’t have one in your home why not purchase one through Blooming Secrets today?