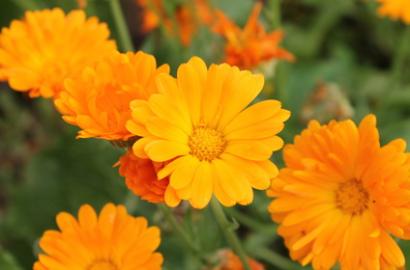 Pansies, asters and chrysanthemums all deserve the attention they get in fall flower gardens and containers, but if you’ve never grown calendulas before you’ve been missing out on a special plant. Calendulas resemble mums in their appearance and like mums they are great in both containers and flower beds. They also work well in bouquets and have been popular choices in cottage gardens for generations. The colors of the flowers are usually yellow, gold or orange and they are particularly beautiful when mixed with plants that have blue or purple flowers.

While you may not be familiar with this flower it has a long and interesting history. Calendulas have been considered a sacred flower in many cultures and religions. They were popular flowers used in crowns and garland in both Greek and Roman rituals. Calendula has sometimes been referred to as “Mary’s Gold” and was part of Catholic ceremonies throughout Europe and they have decorated statues of Hindu deities in India for centuries.

While they are cultivated today primarily for the beauty of their flowers throughout history they have been used for cooking and medicinal purposes. Estates in Shakespeare’s time as well as homes in colonial times grew calendula flowers in their herb gardens. Calendula oil is still in use today as an anti-inflammatory and remedy for healing wounds. It is also said to have antiseptic qualities as well as being a remedy for warts and acne. Calendula also became known as “pot marigold” in many countries, particularly in Germany, as its flower petals and leaves were used in soups, stews and salads. It is also used to color cheese and when steeped in boiling water is said to make a delicious tea.

Calendula grows best in cool climates and temperatures usually found in the fall and early spring. Gardeners in areas of the country where winters are mild can plant calendulas in the fall and enjoy them throughout the winter. Calendulas can tolerate some heat if they are mulched and given a little extra water, but it will eventually stop blooming when the hotter temperatures of summer arrive. Calendula prefers soil that drains well and should be planted in locations where it will get full sun.  Removing the spent flowers will also encourage the plant to continue blooming.

If you are interested in a flower to plant with your children than calendula may be the plant you are looking for. The seeds are large and easy for small fingers to handle. Once the seeds sprout the plants grow quickly and often will flower in as little as 60 days. Their ability to tolerate cooler temperatures means that they will keep blooming even after light frosts. I’ve grown them in my garden and had flowers as late as Thanksgiving in years where temperatures remain mild. If you’re looking for a little cool season color than give calendula a try.