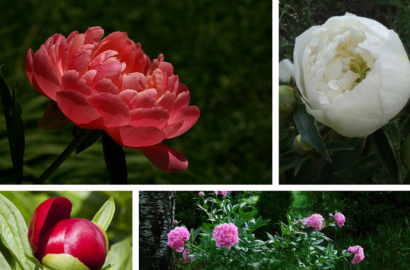 Northern gardeners including myself are generally envious of our Southern neighbors in garden zones 9 and higher as they live in areas of the country where frost is usually not a concern and the ability to be able to “dig in the dirt” all year round is a given. However, every once in a while the roles reverse and one of those times is when the peonies are in bloom. Peonies require cold weather such as is found in garden zones 3 through 8 and as a result are not well suited for frost free areas. As a result, peonies are a favorite of gardeners in the North and the envy of Southern “snowbirds”.

Peonies are native to Southern Europe and China and in both places they have a very regal history. The name peony is said to originate from Paeon, a physician to the gods in Greek mythology. One variation of the myth is that Zeus, king of the gods himself, saved Paeon from the wrath of Asclepius, the Greek God of medicine by turning him into a flower. Another story is that Paeon was saved from mortal death by becoming a flower. In 8th century China red peonies were considered the king of flowers and became a symbol of riches and honor.

When you see a peony flower it is easy to understand how they’ve earned such a noble reputation. These large majestic flowers can be up to 4 feet off of the ground and come in colors such as pink, red, white and yellow. Some varieties have ruffled tips and there are semi-double and double flowered varieties as well. They look particularly impressive in mass plantings and these flowers can also be quite fragrant. They make a spectacular cut flower display in a vase on your kitchen table or in your living room. Cut peonies can be enjoyed for up to a week as long as you check the vase daily and replenish the water as needed.

Peonies can be planted in both the spring and fall and while there is no doubt that peonies are beautiful they also can be a little persnickety as well. The first thing to keep in mind is that they don’t like to have their roots disturbed and transplanting them can be a real challenge. You’ll want to find a spot where the soil is fertile, drains well and gets a lot of sunshine. You’ll want to make sure you dig a hole at least a foot or two deep to allow the roots to grow with no obstacles such as stones or roots. You may also have to wait for up to 2 years for a newly planted peony to bloom but your patience will be rewarded as once established peonies can flower for decades.

After you choose the right spot the next step is to properly plant the peony. Growing peonies from seed is very time-consuming; it can take up to 2 years to grow a peony big enough to plant in your garden. Purchasing bare root plants is much easier and more likely to be successful. Most bare root plants will have 3 to 5 eyes which are the places where the stems will sprout from. These eyes should be planted no more than 1 to 2 inches below the soil line and if you plant them too deeply you’ll get no flowers. Peonies will also require supplemental watering if you experience drought conditions and fertilizing the plant in both the spring and fall is recommended as they are heavy feeders.