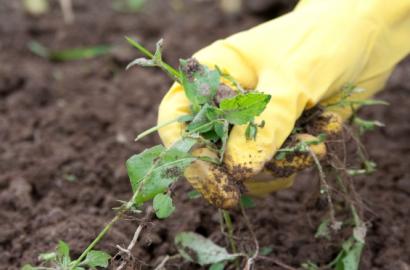 One of the great things I’ve found about gardening over the past thirty years is that I never stop learning. One area that I continue to try to educate myself about is organic gardening as trends are showing that gardeners are increasingly interested in using natural products in their gardens rather than chemicals. Controlling weeds is a task that every gardener performs and there are even natural ways to complete this chore.

While it may seem obvious the most natural way to control weeds is to prevent them from sprouting in the first place. Mulch is applied on top of the soil and in doing so it helps prevent weed seeds from germinating. While it won’t stop all weed seeds from sprouting it can certainly significantly decrease the percentage that do. Mulch can be made out of a variety of materials ranging from shredded tree bark to pine needles.

If your mulch doesn’t prevent the weed from appearing the next natural weed control method is to physically remove it. This can be done by hand and while it is hard work this is a very effective way to control weeds and it allows for precision when trying to remove a weed that is next to a plant that you want to keep. A garden hoe or similar tool can be used if you have larger areas that need to be weeded and you’re not as concerned about being precise.

If you are looking for less physically taxing ways to control weeds there are organic herbicides, such as Weed Pharm, that can be applied even to vegetable gardens. Weed Pharm is a product that contains vinegar which has acidic properties that can kill weeds. I’ve never used this product but my research does indicate that you need to be very careful when applying it in an area that has plants that you want to keep. Even though it is an organic product you will want to read the directions carefully before you use it.

There are two additional natural weed control methods that I thought I would mention but I really think their use should be limited to situations such as weeds that are growing in the cracks of a driveway or in a gravel path or road. The first method is something called a weed torch which is a propane-based tool that kills weeds by burning the protective lining on their leaves and the second is boiling water. A weed torch should obviously not be used around materials that are flammable and you may have to torch a weed several times to fully kill it. You should also be careful as a weed torch can kill any plant that is within 5 feet of where you are using it. Boiling water has similar limitations as a weed torch as it usually must be applied multiple times to kill the weed and can easily damage other surrounding plants.