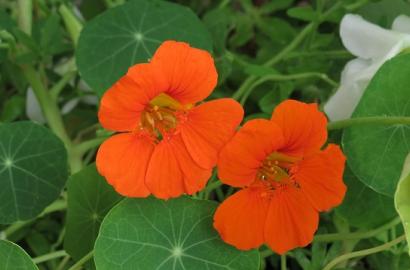 Nasturtiums have a well-deserved reputation as an easy flower to grow. They are the perfect plant to grow with your children as the seed, which is about the size of a pea, is easily handled by small fingers. Once they sprout Nasturtiums grow very quickly and they are also very flexible in that they can be used in containers such as a window box, as a bedding plant, as an annual groundcover or as a vine climbing up a trellis or cascading over a wall. The blooms can be used as a cut flower in floral arrangements and both the flower and leaf are edible.

Nasturtiums also have a long and interesting history as well. As a plant native to South America it has been documented that Indians in Peru steeped a tea from the plant that would be used to treat coughs, colds and the flu. It has also found to have antibiotic properties which can be used on cuts and scrapes to prevent infections. They were a favorite flower of the French painter Monet and found their way into many of his paintings and during World War II pepper was very scarce and nasturtium seeds were ground down and used as a substitute for this spice.

The flowers come in variations of yellow, orange and red and while the flowers are typically what gardeners focus on the foliage is very interesting in its own right. The leaves look almost like lily pads and they share the same pepper-like taste as the blooms. As a matter of fact the more sun and heat the plant receives the spicier its leaves and blooms taste. The blooms and leaves can be used in soups and they are particularly beautiful when combined with spinach in a salad. You just want to be sure that you don’t harvest the blooms and leaves if you’ve used any pesticides in their vicinity.

Nasturtiums are not fussy but they bloom prolifically when grown in full sun and in soil that drains well. As a matter of fact they will often perform even better in poor soil and you don’t want to fertilize this plant or you’ll get a lot of leaves and few flowers. Since they are so easy to grow from seed you are unlikely to find them as seedlings in a garden center. They should be planted about ½ inch deep and about 10 to 12 inches apart. It is a plant that is very sensitive to frost so you want to be sure you plant the seed in your garden after the danger of frost is no longer a concern.

While nasturtiums are easy to grow they are not without their drawbacks. Too much water can cause the plant to rot and this is why good drainage is so important. They are also susceptible to damage from slugs and whiteflies but interestingly enough they have been grown in French gardens for centuries because they are an aphid magnet. The aphids are so attracted to the nasturtiums they ignore other plants in the garden that the gardeners want to protect.

While they may be considered old-fashioned or not enough of a challenge for more advanced gardeners there is always room in your yard for this carefree annual flower.