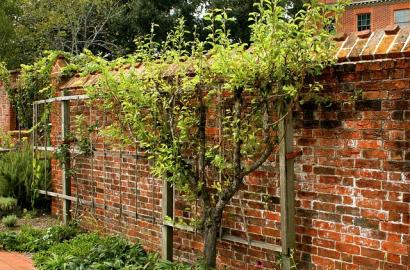 Early in my personal gardening odyssey, I accidently came across a distinctive method of growing trees and shrubs. I found a forsythia seedling that had rooted itself at the base of a fence in our backyard. My first instinct was to pull it out but I looked up and saw the fence and I wondered how the yellow spring flowers of the forsythia shrub would show up against the red color of the fence. I decided to leave it in place and began to tie it up in an effort to train it to grow on the fence. It was only years later that I was reading a book on gardening and found out that what I had done was actually a technique that dated back to ancient Rome.

Espalier is a French term that refers to trellis or frame but over time, this technique came to include the plants themselves as well as the practice itself. During the middle ages, many castles in Europe would train fruit trees to grow on the interior walls of the structure to save growing space as well as decorate the stark walls of the castle. Espalier also became a popular technique for growing grapes in vineyards as well.

While this technique is most often associated with fruit trees it can be done with many trees and shrubs. As we know plants will grow toward the sun and, as a result, they can be pruned and bent into just about any pattern you want. Some of the more popular shapes include one main branch that is trained to grow up vertically but then strategically pruned so that sprouts can be trained to grow horizontally in both directions. Another popular pattern is similar to a candelabra with one main stem, pruned so that the sprouts will grow horizontally and then pruned again over time so that the sprouts will grow up vertically.

When I attempted this technique with the aforementioned forsythia I started by simply tying the shrub to the fence but I did eventually discover that to get the pattern you want you’ll likely have to install a series of wires to attach the plant to. The wire should be at least 14-gauge for strength and it should be installed so that there is at least 1 foot of clearance between the wall and the wire to allow room for the tree or shrub to grow. What you tie the branches to the wire with is also important. Twine and strong cloth are easy to loosen as the branches grow while a wire is likely to dig into the branches which could cause injury or damage to your tree or shrub.

It will take several years to get the tree or shrub pruned into the shape that you are looking for but once that is accomplished there still is work to do. Particularly if the plant you use is a fruit tree cutting back of new growth will improve fruit formation as well as the aesthetics of the espalier. As a matter of fact for the first year or two, you will probably want to remove the fruit buds as this will enhance fruit production in the future. While espalier is a technique that requires a lot of patience the beauty of what is produced as well as the interest it will generate with family, friends and passersby make it well worth the effort.