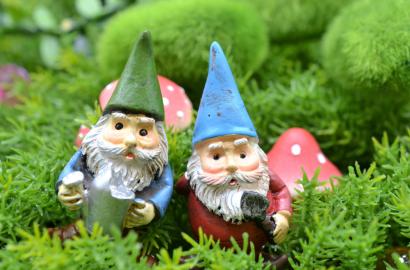 Having a garden can be a great way to relax in the summer with the warm sun shining down on you. It can be difficult to keep on top of all the work that needs to be done. There are so many different things you have to take care of in order to have a successful garden, from planting new flowers and vegetables, making sure they are watered regularly so they don't dry out, and fertilize when they need extra nutrients. So, if you're looking for something that will help make your garden special, there is an option for you: having a gnome in your garden! Gnomes bring magic and mystery into gardens - we love how they look like little people enjoying their own secret place!

The earliest appearance of a garden gnome-like statue was in ancient Rome. Their garden forerunners were statues that represented the Roman gods. The most common among them was the god Priapus, a minor fertility deity whose origin came from Greek mythology. This deity was the protector of livestock, planting, and gardening. The act of putting out statues that represent mythical creatures has been around as early as the renaissance.

Garden gnomes became popular as home ornaments by the beginning of the 18th century, but mostly for wealthy families. It is believed that the very first contemporary-looking garden gnome (with the iconic red hat), was made in Germany by sculptor Phillip Griebel. Soon, the fashion had spread across Europe, from England to Poland, and Griebel concentrated his entire manufacturing around producing garden gnomes.

Gnomes have been a big part of folklore for centuries. They are typically portrayed as small humanoid creatures with a pointy red hat and a long white beard. Current statues can be made of concrete or plastic and come in different sizes, shapes, and colors.

There are several reasons the use of gnomes in a garden became popular. In the very beginning, garden gnomes are a symbol of good luck. Gnomes also added some color to a mostly green garden. People also thought the gnomes would provide protection. They were thought to provide protection for buried treasure, minerals in the ground, and to watch over crops and livestock.

For some, the presence of gnomes in the garden helped promote the natural growth of plants. Folklore indicates the gnomes were creatures that took care of vegetation. They were known to be good with their hands which is great for growing plants. Others felt the primary function of these statues was to protect the gardens from evil spirits, as well as to ensure a successful harvest. Gnomes for some people help provide a connection to an older way of life. Farmers believed they were good luck charms and even helped gardeners during the night.

In 1937, Walt Disney Productions released “Snow White and the Seven Dwarfs,” as an animated musical fantasy movie. Decades later, in 1989, the movie was recognized for its cultural and historical significance, thus being preserved in the National Film Registry. Part of its cultural influence lay in restoring the glory of garden gnomes, whose physical similarity with dwarves was more than obvious.

Since the 1970s, the mass production of garden gnomes has replaced handicrafts. The variety of materials was greater than before, and many gnomes were now made of plastic. This type of production led to lower quality compared to handmade gnomes. Such manufacture made garden gnomes more affordable and thus available to a wider market, however, they lost the artistic value they once had. Gnomes traveled a long road from exclusive decoration for the wealthy and powerful, to the ornament frequently displayed in middle and working-class gardens.

Today a gnome is used to add to the design and color of your garden. Gnomes can create a good impression on your overall garden look. Funny gnomes can also add life and humor to your garden.

While there are many different types of gnomes available, they all share one thing in common - they are cute, friendly, and have personalities that are unlike any other statue in your garden. The best part is that they do not require much maintenance at all which means you can enjoy them for years without worrying about them getting dirty or having to redecorate. Many people find that they get great joy out of having their own personal garden gnome.