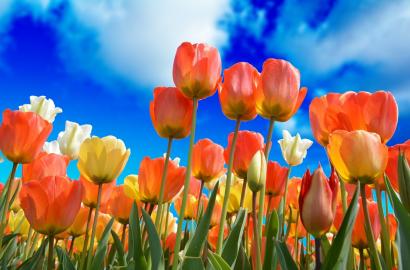 Tulips are beautiful and one of the most popular flowers in the world. The Dutch were the first people to cultivate tulips back in the 1500s. They brought tulips from Constantinople, a Turkish city, and cultivated them in their homeland. Tulips were known as “the jewels of the Netherlands” because they became so central to Dutch culture and economy in the seventeenth century.

1. Tulip Demand Is High – Although tulips originally came from Turkey, today tulips are mainly associated with the Netherlands. Each spring, thousands of visitors travel to the country to enjoy the flower spectacles at the Keukenhof and the tulip fields of Bollenstreek. The intended use of these tulips is for export. In 2021, the value of the tulip bulb export was over 250 million euros.

2. Tulip Background – Tulips are bulbous spring-flowering plants that are part of the Lily family. They are related to onions. The flowers are usually boldly colored, cup-shaped, and symmetrical. The name “tulip” is derived from the Persian word for turban delband, which the flower somewhat resembles.

3. Tulip Mania – Tulip Mania or tulpenmanie describes a time in the Netherlands in the 17th century.  Flemish botanist, Carolus Clusius, did medicinal research on plants and was responsible for the popularity of tulips in the Netherlands. The tulips in his garden were so rare, it was raided many times. Clusius studied tulips and was especially interested in the unique colors of the flowers. Clusius and other scholars did not know the striped coloring was caused by a virus. At first, people just exchanged seeds and bulbs, but the tulip bulbs became so popular, especially the unique ones, the price hiked, and the demand soared. Tulips were even used as a form of currency.  During this time, tulips were the most expensive flower in the world. Between 1634 and 1637, it has been said tulips cost almost 10 times what an average working-class man earned each year. Eventually, Tulip Mania crashed but not the country's love of the flowers. There was a book and movie about this time called Tulip Fever.

4. Thousands Of Varieties – The Netherlands exports 2.5 billion tulip bulbs each year that include 8,000 varieties.  Of the 8,000 varieties, 23 make up 40 percent of the tulip bulb production and are sold in garden centers or used for flower production. Yellow 'Strong Gold' is by far the most popular tulip variety. ‘Leen van der Mark’, a red and white tulip, is in second place.

5. Tulip Colors - Tulips come in many colors and shades. They can be found in red, pink, purple, white, and yellow. Pretty much every color but blue and true black.  There are some tulips that come very close to black, but they are actually a deep purple.  Queen of Night is the closest to black!

6. Tulips Are Edible – Besides being beautiful the flowers and bulbs are edible. You should only eat the petals and bulbs avoiding the leaves and stems. Tulips are used for entrees to rich desserts. When choosing your tulips make sure you select organic ones that are free of pesticides and chemicals and grown in a clean environment.  Different tulips have different textures, scents, and flavors based on their species and age. Younger tulips may be better suited for most recipes. When first trying tulips start small to see how your body reacts. Tulips can be used to replace onions in some recipes.

7. Tulips Continue To Grow After Cutting – Unlike most other cut flowers, tulips can grow up to six inches more in a vase. A dutch gardener once told me to put a rusty penny in the water and that helps them to grow straight instead of flopping over, which actually works. For longer enjoyment, make sure you buy or cut your tulips when they are still closed but you know the color of the flower. Remove any foliage below the water line otherwise, it will decompose. Tulips will also bend and twist to grow toward the light.

8. The Meaning Of Tulips – Tulips symbolize love and spring’s arrival in general but each color means something different.  Red tulips stand for love and romance, white is if you want to say I am sorry. Purple is associated with royalty and yellow stands for cheer and happiness.