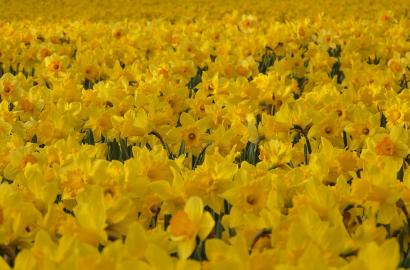 As we wait with anticipation for our Daffodils to bloom, we put together some interesting facts about this beautiful flower.  Daffodil is the official common name for any plant that falls under the genus Narcissus, but it is more common for people to use the term "daffodil" to refer to these flowers.  If you grow daffodils, you know they will bring you years of beauty.

According to the American Daffodil Society, these varieties are categorized under 13 different divisions.  The divisions are based on the flower shape.  The divisions, derived by the Royal Horticultural Society are based on using two parts of the flower.  One is the petals (perianth) and the other is the cup (corona).  You can learn more about these divisions on the American Daffodil Society Website.

2.  Daffodils Bloom In The Spring

While Daffodils typically bloom in the spring there are different bloom times depending on the variety.

With early varieties, you might find warmer zones in the south have their daffodils blooming in February, but in northern zones, they might not appear until March.  Here are some examples of early spring bloomers:

The next grouping of flowers based on bloom time is midseason.  These daffodils will bloom in March in southern regions and in April for northern climates.  Examples of mid-spring bloomers are:

Late spring bloomers are the last grouping and they will start appearing in mid-May in northern zones and a little early in southern geographies.  Here as some late spring-blooming daffodils:

3.  Next Year’s Blooms Depend On This Year’s Foliage So Don’t Cut Them Back

Do not cut back the leaves on your daffodils until after they have turned yellow.  Daffodils use their leaves as energy to create the flowers for next year.  The plant continues to absorb nutrients for about six weeks after the blooms have died.  The plant still needs sunshine and water during this time.  As the bulb is being built for next year, the leaves on the plant turn yellow and die back.  If you cut back the plant too early you deplete the bulb. If you don’t like to see the foliage during this time, try growing grasses or lilies around your daffodils as they can hide the dying foliage. Here are our tips on Cleaning Up Your Daffodils.

I like to use my daffodils as cut flowers. If you do too, make sure you keep them in separate vases away from other cut flowers.  Daffodils produce sap that can cause other flowers to wilt sooner. If you
want to mix them with other flowers in a vase, soak them in water for 24 hours first to remove the sap.

5.  If Daffodils Have Stopped Blooming They Need To Be Divided

Once the foliage has died in the late spring, dig up the entire plant.  Separate the bulbs and store them in separate bags.  Replant them in the fall.

The bulbs and leaves contain poisonous crystals which only certain insects can eat without having problems.  Deer, squirrels, gophers won't eat daffodils.

7.  Daffodils And Groundcovers Don’t Get Along

The two will be competing for nutrients and moisture, so don’t plant the two near each other.  Vigorous, tall-growing, and deeply rooting plants, such as pachysandra and ivy, are likely to discourage daffodils.

In ancient Rome, Daffodils were used as a healing plant. They extracted the sap to deal with their health problems. Daffodils were used to induce vomiting and treat skin ailments. Hippocrates, the Greek physician used daffodil oil for uterine tumors.  The bulbs have also been used topically to treat tumors in North African, Central American, Arabian, and Chinese medicine during the Middle Ages.  Traditional Japanese medicine uses the root to treat wounds.  It is also being looked at for combatting Alzheimer’s and curing cancer.

Daffodils were first used in gardens around 300 BC.  The Greek botanist and philosopher Theophrastus listed and described Narcissus in his book ‘Enquiry Into Plants’.  Romans also treasured the flower.  The flower then faded for centuries until it re-emerged during the 1600s when the English gave them a place in the garden.  It is thought when settlers came to America from Great Britain, they brought Daffodils as a reminder of their past lives to the New World.  The bulbs were hardy and easy to transport during their ocean voyage, so a huge percentage of them survived and were planted across the eastern seaboard and Appalachia.

These flowers wonderfully symbolize the coming together of all of your little memories and combining them to make one extraordinary life.  The daffodil is also the national flower of Wales.

If you want to know more about Daffodils, The American Daffodil Society is a wonderful resource.  It has information on growing daffodils and a database with photos of 23,000 daffodils.