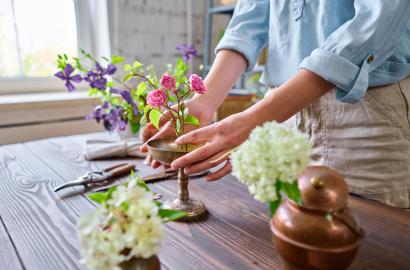 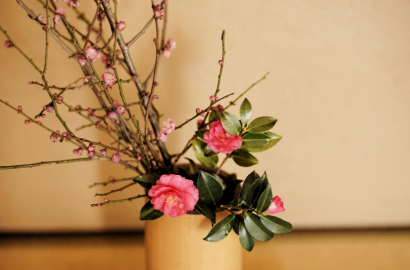 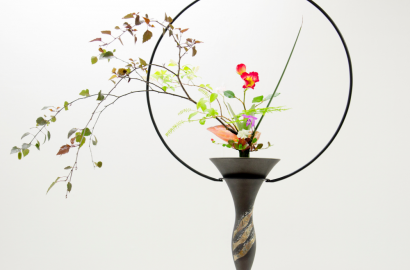 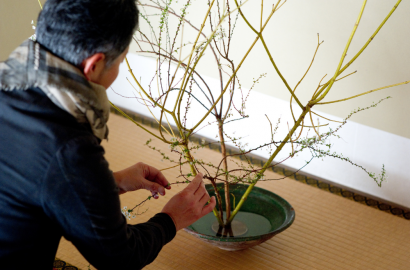 Ikebana is a Japanese art of flower arranging that uses flowers and plants in an aesthetic way. Ikebana means “to live” and “flowers” in Japanese. The art form is based on the principles of nature, space, and time. Ikebana is one of the most popular arts in Japan, with more than fifteen million practitioners in Japan.

Ikebana began in Japan in the 6th century when Buddhism was introduced to Japan from China and Korea. At this time monks started to arrange flowers called kuge to decorate the altars of temples. The arrangement consisted of three main stems gathered closely at the base and they rose from the water as one. The three stems were used to represent the harmonious relationship between heaven, humans, and earth.

In the 10th century, the offerings were being presented in containers and were the responsibility of the priests. Soon the popularity and appreciation for flowers in vases developed and were unrelated to religion. During the 16th century, Buddhist monks started using flowers as part of their meditative practice while they were living in temples. An expert arranger became known as the “priest of the lake,” or Ikenobo.

Eventually, the name Ikenobo became attached to the priests at the temple who specialized in these altar arrangements. Soon, other priests sought them out for instruction. Thus began the development of an art form with fixed requirements. Today there are thought to be over 3,000 ikebana schools in Japan, each with its own distinctive style, but all of them can trace their history back to Ikenobo.

Ikebana is a meditative and spiritual practice that is used to create harmony in the environment. When you create your arrangement, it is supposed to be done in silence. Ikebana has many principles that are followed to create a balanced and aesthetically pleasing arrangement.

The principles of ikebana are:

It is practiced by arranging flowers and branches in a container. The arrangement is meant to be symbolic and evoke an emotional response. It was originally created as a way of appreciating the transient beauty of life but has evolved into an art form that still plays on this theme.

There are various types of Ikebana arrangements, and they are classified by the type and shape of the container, the type and number of flowers used, and the design concept. The one thing all these arrangements have in common is they are meant to be appreciated visually.

Ikebana arrangements are usually composed of three main parts: the container, the flowers and foliage, and the space between them. The container may be anything from a simple vase to an ikebana-specific vessel. The flowers themselves may be fresh or artificial; some arrangements use silk leaves instead of fresh foliage.

The space between the flowers is called kire (the void). Kire can be used to create different effects in an arrangement. For example, one might place taller plants on the outside of their arrangement so that they appear as if they are sheltering their smaller companions from outside forces.

Flowers are selected to create a harmonious and aesthetic composition. While the branches or stems play a large role in determining lines that will create movement in your arrangement, the flowers are the extra bonus.

The flowers are selected to evoke the feeling of the ikebana. They are chosen in their natural colors, shapes, forms, and textures in mind. Flowers should also be chosen to evoke the mood or seasonality (e.g., winter). Certain flowers have symbolic meaning in Japanese culture.

Here are some popular flowers used in ikebana and their symbolism in Japan:

There are many schools of Ikebana. Click here to find out more about the ones available in the US through the Ikebana International North & Central American Region.