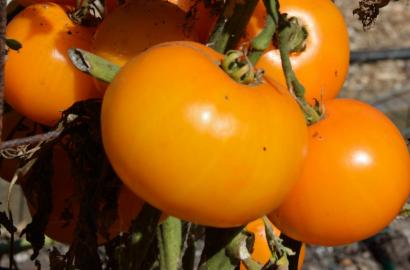 In recent years gardeners have made organic and heirloom tomatoes very popular. Organic tomatoes are cultivated using only natural fertilizers and no synthetic pesticides and studies have shown that they may have greater levels of lycopene and other beneficial nutrients. Unlike modern Tomato seeds which have been bred to produce larger yields and a deep red color heirloom tomatoes lack these genetic alterations. Heirloom Tomatoes have grown in popularity over the past few years as gardeners want access to wider varieties which have been lost over time, as well as for their taste, which many consider to be better than modern tomatoes.

The Tomatoes popularity with gardeners is evidence of the relative ease with which it is grown but Tomatoes do have their challenges. They are subject to pests such as stink bugs, aphids, white flies, slugs and cut worms. One way that gardeners can protect their tomatoes from some of these pests is through something known as companion planting. Planting certain plants with tomatoes can keep bugs away including herbs such as parsley, chives and dill as well as marigolds and garlic. Additionally, tomatoes can be subject to diseases such as tobacco mosaic virus, verticillium wilt and fusarium wilt. There have been attempts to increase the resistance to these diseases in modern tomatoes but the heirloom varieties do not have this type of protection.

With so many varieties available there are Tomato seeds or plants that will fit your personal preference. So who cares if Tomatoes are fruits or vegetables!  The Supreme Court..really?