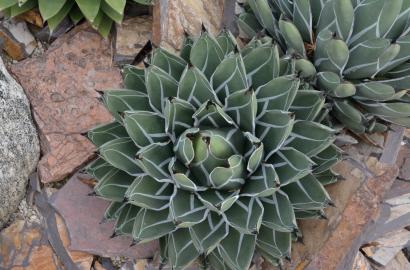 Many gardeners will tell you that Succulents are the easiest plants to grow in the world. I can’t say that I disagree with them! Some Succulents are virtually indestructible and their undemanding nature makes them an ideal plant for many tough growing situations. Their versatility also allows them to thrive both outdoors and yes, even indoors. If you are new to gardening or just want to try growing something new Succulents could be the plants for you.

Succulents can be found virtually everywhere in the world. There are literally thousands of types of Succulents which range from plants that many of us have heard of such as Aloe Vera to the Cactus that is most associated with desert growing conditions. They include flowering annuals such as Portulaca and perennials such as Ice Plant. There are groundcovers that are Succulents such as Sedum and even houseplants including Jade Plant and Snake Plant. Did you know that the Christmas Cactus is a Succulent?

Succulents share some common characteristics most of which center around their ability to retain moisture. They have thick, fleshy parts such as their leaves, stems or roots which can hold water for lengthy periods of time. This is what enables these plants to survive in hot, dry conditions. When I was growing up our family had a Snake Plant which somehow found its way to my Father’s work bench. I’m embarrassed to say that we didn’t water that plant for several years and the leaves eventually withered and died. While cleaning up that work bench I found the plant and on a whim decided to water it to see what would happen. Would you believe that the plant actually came back to life? Now that is what I call tough!

A common misconception is that Succulents only grow in hot environments. While their ideal temperature ranges are 75 to 85 degrees during the daytime and 50 to 55 degrees at night the truth is that many Succulents can survive cold temperatures even as low as 15 degrees. The ability of Succulents to survive in difficult environments is a major benefit but an added bonus is that many have striking colors or color patterns. Some of them even flower and their unusual shapes can add texture to a landscape.

When it comes to growing Succulents indoors they require bright light such as is found in a Southern facing window and a quick draining potting mix, such as one made for Cactus. Succulents should be allowed to dry out between waterings and during the winter you may only have to water them once a month or even once every other month. These plants are slow growing which means you can plant them in a container and not have to worry about them outgrowing their containers for many years.

If you’ve never thought about growing Succulents indoors why not take a look at what Blooming Secrets has to offer and try one for yourself. I think you will find they are the easiest plants to grow in the world!