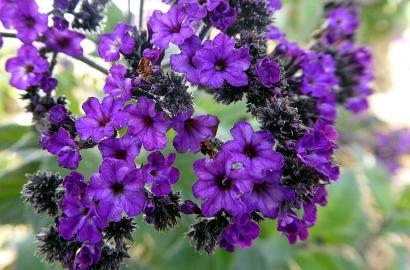 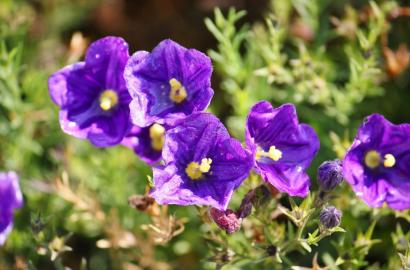 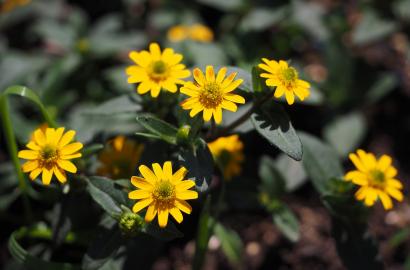 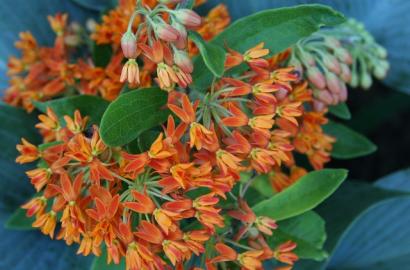 For the month of July, we have selected a mix of flowers you probably know and a couple of flowers you might not have experience growing. Let us know which ones are growing in your garden!

Heliotrope is a shrub-like plant that has clusters of delicate little flowers.  The flower blooms from summer and goes until frost. It is also known as Cherry Pie, Mary Fox or White Queen. This flower is has a wonderful aroma which has been described as smelling like Cherry Pie (hence its other name), Grape Popsicles and even Vanilla. The flower is a temperate perennial, and is grown as an annual flower and comes in rich purple, blue, or white flowers.  It loves full sun and moist, well-drained soil. The one thing to be aware of this plant is that it is poisonous to humans and animals if ingested. Make sure to keep them away from your children and pets.

Nierembergia is also known as Cupflower or Purple Robe.  This flower has cute petite cup-shaped blooms and comes in blue, lavender and white.  It looks great in containers, hanging baskets, or as a border in your flower bed.  Nierembergia flowers have paper-thin petals and the foliage is also delicate. The flowers are heat and drought-tolerant. The flower is usually grown as an annual but is a perennial in zones 7-10. When growing them many gardeners start them indoors. When transplanting them outdoors make sure it is several weeks after the final frost. This flower is easy to care for as long as they receive direct sunlight or partial shade.

Sanvitalia is also known as Creeping Zinnia.  While it is not a true Zinnia it does resemble one.  This Mexican annual flower has small bright yellow flowers that bloom starting in the summer and last until frost. Sanvitalia prefers full sun but also will grow in partial shade but will flower less. Plant outdoors when all dangers of frost have passed and the soil is warm. If you want to prolong flowering you will need to deadhead spent blooms. It is the perfect spiller for hanging baskets or containers.

Butterfly Weed is a North American native plant also known as Asclepias Tuberosa.  It is a perennial plant with clustered orange or yellow flowers. As its name indicates it is a favorite flower for Butterflies but it also attracts hummingbirds and bees throughout the blooming season.  The small flowers are nectar and pollen-rich and bloom June to August. Butterfly weed plants spread by way of seeds, which are released from large pods in early autumn. Butterfly weed is easy to grow and thrives in bright sunlight. The plant is drought tolerant and does well in even in poor, dry soil.