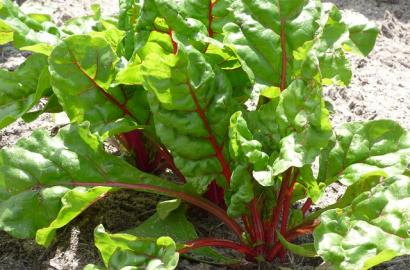 The last few years has seen a lot of press about Kale being “the new super food”. Well, don’t look now but there is a new #1 contender for that crown. Recent research has found that chard leaves contain at least 13 antioxidants and they also include syringic acid which has demonstrated the ability to help regulate blood sugar levels. In addition to these anti-oxidant benefits chard leaves also have anti-inflammatory and detoxification properties. So when you see these rainbow-colored leaves on your dinner plate just remember that there is more to this vegetable than pretty colors! It is a nutritional powerhouse!

Swiss Chard was identified by you guessed it, a Swiss botanist but it has been a staple of Mediterranean cooking for centuries. It is also known as Silverbeet, Roman Kale, and Strawberry Spinach and is related as its name suggests to Spinach and Beets. Swiss Chard's thick stalks can be colored red, white, yellow or green and they the plants can grow up to 30 inches tall. The stalks, while edible, have a bitter taste and it is the leaves that are really the focal point of this vegetable. The leaves are usually red or green and while the red leaves can be quite beautiful in your garden the green-leafed varieties tend to out produce them.

Chard is a biennial which means it is planted during one growing season and harvested in another. It will typically be started in June through October and harvested the following spring. Unlike Kale and Spinach, it can tolerate warmer temperatures and you’ll be able to harvest the leaves until the really hot weather arrives in June. It is best to pick the leaves when they are young and tender but the mature leaves can also be consumed. The younger leaves can be eaten raw in a salad but the mature leaves should be cooked to eliminate the bitterness that can develop as the leaves mature. It is possible to get several harvests out of one planting so the more you pick…the more you will get! Swiss Chard, similar to Spinach, is extremely perishable so you’ll want to use it right away. Leaving it in the refrigerator for more than 3 days will cause it to lose a lot of its nutritional value.

This vegetable prefers a sunny spot with rich soil. Using mulch will keep the soil moist and if it doesn’t rain you’ll need to water the plant accordingly. Mulch can also help keep the leaves clean and reduce the risks of disease. You should space the plants 12 to 18 inches apart and feed the plants every 3 to 4 weeks during the growing season. Swiss Chard can also be grown effectively in pots and it can make and interesting centerpiece to a container in addition to its being a food source.

A plant this nutritious and versatile deserves a place in your garden. Look out Kale…here comes Swiss Chard!