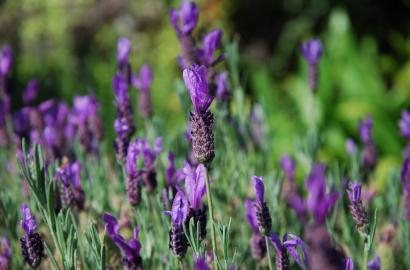 Lavender is one of those scents that have the power to evoke the senses.  Most notably, feelings of relaxation and well-being.  In fact, it was long believed that Cleopatra's secret weapon, in love, was Lavender.

Calm and refreshing it’s not surprising the word Lavender in Latin (Lavare) means for wash or bathe.  Because of its sweet aroma, it was widely used in Europe as an herb to wash linen.  Later, Lavender’s antiseptic, anti-inflammatory, anti-microbial and anti-fungal properties were discovered, giving rise to its use as an aid to bug bites, burns and skin abrasions.  This essential oil is also used to repel mosquitoes.  Planting Lavender in one’s garden is a great way to naturally repel unwanted pests.  If you like to make your own honey, bees LOVE Lavender flowers or if you prefer to buy honey, you can make a Lavender honey infusion using dried Lavender buds (organic preferably).

Part of the Mint family, there are 39 known species of Lavender.  The most popular being Lavandula Angustifolia formerly L. officinalis.  Native to the Western Mediterranean it is often referred to as True Lavender.  This species is highly favored for its sweet aroma with minty and camphorus undertones.  This species is grown in high altitudes which is responsible for its unmistakable sweet overtones.  In ancient Greece, Lavender was so highly favored; sonnets and poems were written as tribute.  Ancient Greeks referred to Lavender as nardus, after the Syrian city of Naarda.  We are so taken with this wonderful perennial we've even named a color after it.

Lavender Essential Oil is used in Aromatherapy to relieve headaches, anxiety, stress and insomnia. There are a variety of ways to employ its properties beyond using it as a flowering plant in your home or garden.  Try filling a sachet with Organic Lavender buds or use bath salts infused with Lavender essential oil in a warm bath.  You can use Lavender in an aromatic and relaxing candle or use loose Lavender buds in a sachet which can be placed in clothes drawers, hung in closets or over doorways.  Lavender buds release their aroma for long periods of time which allow you to take pleasure in this truly enjoyable and relaxing flowering plant.