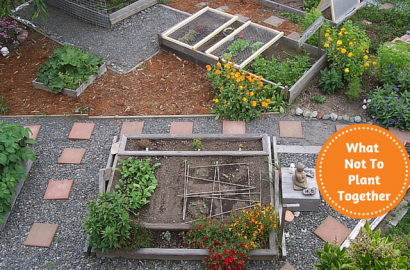 The origins of companion planting in North American vegetable gardens is said to date back to when Native Americans taught the pilgrims how to plant squash, corn and beans. This technique has also been used since the middle ages in France when farmers recognized that certain plants seemed to grow well together while others seemed to do poorly when planted in proximity to one another. Companion planting often seems to be more rooted in folklore than scientific fact but while the focus is usually on plants that grow well together our article this month is about why some plants have “irreconcilable differences”.

The first reason some vegetables don’t work well together is due to a process known as allelopathy. Some plants actually secrete compounds into the soil that are detrimental to other plants and can hinder their growth and even prevent the seeds of other plants from sprouting. For example, black walnut trees will actually produce a toxic compound that stunts the growth of vegetables like tomatoes. The herb fennel has a similar impact on tomatoes and while crop rotation is important in a vegetable garden it is usually not a good idea to plant tomatoes where vegetables in the brassica family (cabbage, cauliflower, broccoli, kale and Brussel sprouts) have been cultivated as they will leave behind compounds that impact their growth.

Another reason some plants don’t grow well together is because they can attract insects or diseases that can be detrimental to their potential partners. Earworms can be a real problem for corn plants but to make matters worse they attract fruit worms that like to feast on tomatoes. It has also been discovered that potatoes, which can be negatively impacted by blight fungus, can transmit this same disease to tomatoes. This problem with cross-contamination makes it important to plant these vegetables as far away from one another as is possible.

Finally, some plants are not good companions for what I would call “environmental reasons”. The good news is these are often mistakes gardeners make that can be corrected. For example, cucumbers and bush beans grow well together unless you plant the bush beans in a place where they get too much shade from the climbing cucumbers. If you’ve always wanted to try to grow black-eyed peas in your garden than you may want to think twice about planting them near corn, tomatoes and squash. This is because black-eyed peas perform better in dry conditions while the other three aforementioned vegetables are “heavy drinkers”. Lastly, you want to be sure not to plant peas, which require light amounts of fertilizer, with broccoli which require significant amounts of fertilizer. Too much fertilizer will cause your peas to have lots of leaves but fewer peapods and obviously the broccoli won’t perform well without the nutrients it requires.

Companion planting is not an exact science and it can take some trial and error to figure out what plants are good neighbors and which are not. Don’t miss our article next month which will tell you more about which vegetables are good neighbors and be on the lookout for a little cheat sheet that you might find helpful in your vegetable garden this year.