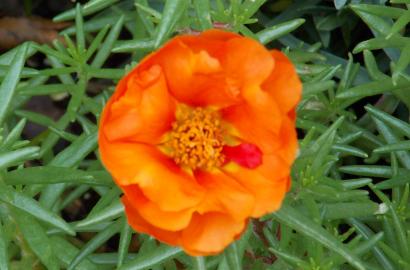 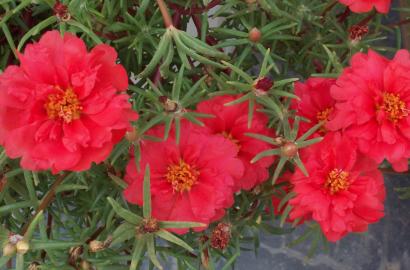 One of my family members once described Portulaca, also known as Moss Rose her “happy flower” and when you decide to grow this flower in your own garden you’ll know why. Portulaca is among the easiest flowers to grow either directly by seed or by buying plants at the garden center. I have been successful growing it both ways but if you are growing them from seed it is a good idea to mix the very small seed with sand to make planting the seed a little easier. Although it is considered an annual flower, meaning that it grows and flowers all in one growing season, it is a prolific self-seeder when it finds an environment that it enjoys and therefore it acts like a perennial flower coming back year after year. Portulaca only gets 6” to 9” high so it is a good plant for the edge of your flower beds and it is useful in both containers and hanging baskets.

Portulaca comes in a range of colors like yellow, orange, red, and bright pink with white, cream, available as well. It has a long flowering season in most areas of the country starting in the later part of spring and continuing to produce flowers all the up to the first fall frost but it can benefit from being trimmed back and fertilized with Miracle Gro or a granular fertilizer in late July. A particularly desirable trait is that Portulaca is very tolerant of heat and dry conditions. As a matter of fact it is considered a succulent which is a plant that has thick stems or leaves that help retain moisture. It is so hardy that it has re-seeded itself in my garden in between patio stones and even in the grooves of my concrete driveway and I have easily pulled these seedlings and transplanted them in more desirable places. I have also found that it is highly insect resistant and I’ve never had to treat it for any infestations although I have read that aphids can sometimes be a problem.

Like most plants Portulaca does have some drawbacks. It is a “sun worshipper” and many varieties have flowers that close late in the afternoon and their blooms may not open on particularly cloudy days or if planted in shady areas. Seed companies are working to develop new varieties that will overcome these limitations. Although it can do very well without a regular watering schedule it does flower best when it is given some additional water during particularly hot spells. However, it does not tolerate soil conditions that are very damp such as where there may be standing water or poor drainage. Although it has the ability to grow in spaces such as those found between patio stones or stepping stones it does not stand up well to being stepped on.  Finally, I have found that the deer in our area find Portulaca to be a tasty meal and if you have problems with deer you will want to plant Portulaca in areas that the deer can’t get to it or treat it with some deer repellant.  All that being said Portulaca is a worthwhile addition to your garden and if you’ve never grown it before you may want to give it a try.