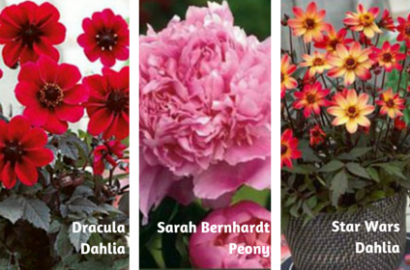 The Oscars are being awarded this evening so I thought it might be appropriate to comment on gardening’s lengthy relationship with Hollywood. Gardens have been the setting of many notable scenes in films over the years. Do you recall the scene in the vegetable garden when a heart attack takes the life of Don Vito Corleone or how about the conservatory where Georg and Maria declare their love for one another in the Sound of Music? Not only have gardens been the settings of important scenes in academy award winning films, but many Hollywood stars are avid gardeners themselves. Who knows, there may even be a landscaping idea or two that you can get from your favorite actors and actresses.

Many Hollywood celebrities have been visible advocates for organic gardening. Oprah Winfrey is perhaps the most prominent of them all as she actively blogs about and shares the organic vegetables, herbs and fruits that are grown in her gardens. Julia Roberts is reported to be a very passionate gardener and composts her own kitchen scraps. Jake Gyllenhaal grew up around farming and is an enthusiastic supporter of the edible schoolyard project which teaches children how to grow and cook food as well as the health benefits of gardening.

The love of gardening isn’t just limited to American actors and actresses; Nicole Kidman gushes about the organic vegetable garden she has at her farm in Tennessee. She claims it is just a hobby but it turns out it must be in her blood as her Mother and Sister are also avid gardeners themselves. While Sting may be more famous for being a musician than an actor he is also an advocate for organic gardening and the health benefits of consuming organically grown foods.

Hollywood stars are not only advocates for the benefits of gardening, but for decades they have been the inspiration for growers and breeders. While these may not be original ideas it occurred to me that there are plenty of garden themes that could be built in your yard or mine. There is a Bearded Iris that has been named after the singer and actress Cher, but almost all of the flowers named after Hollywood celebrities seem to be Roses. If you are a Rose aficionado than maybe one of these themes could be for you:

• Academy Award Winners: How about a Rose garden which includes flowers named after Henry Fonda, Grace Kelly , Elizabeth Taylor and the first lady of the American theatre, Helen Hays. If you’ve got the room you can also include Roses named after Ingrid Bergman and Audrey Hepburn.

• Film Stars Who Also Made It Big on TV: A garden built around stars that were huge on film and television would include Doris Day, Lucille Ball and George Burns.

As you watch the academy awards tonight don’t forget that your love of gardening probably means you are in some pretty famous company!