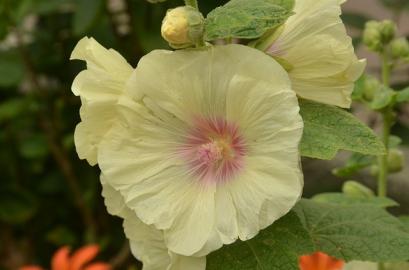 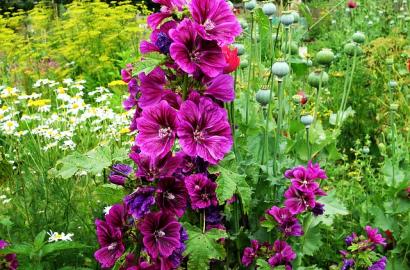 If you are a fan of English cottage gardens than you probably know all about Hollyhocks. Despite it being considered “old-fashioned” by some gardeners the Hollyhock is still as revered as ever and it remains the quintessential country garden flower. Recent years have seen the introduction of dwarf varieties of Hollyhock which can be grown in containers but the classic varieties with their stately flower stalks that can grow up to 9 feet tall and remain the more popular choice for many gardeners. Whether they are part of a flower border or growing up against a wall or fence few flowers can match their beauty.

Hollyhocks are relatives of the Hibiscus and grow best in garden zones 4 through 8. They appear to be perennials as they do come back year after year but they are actually biennials which self-seed prolifically. Being a biennial means that it is often best to start new Hollyhocks in August or September so that they will then bloom the following summer. However, if you start Hollyhocks indoors about 8 weeks prior to the last frost event in your area it is possible to get them to bloom from seed in their first year.

Regardless of whether or not you start the seed indoors or outdoors here are a few tips on how to successfully grow Hollyhocks from seed:

When you plant Hollyhocks you want to look for a location that has moist soil that drains well. It is also a good idea to keep in mind that those tall flower stalks need support or heavy rains and winds can knock them over. If you are not able to plant them near a source of support such as a fence, deck or wall then you will have to use garden stakes to support the flowers when they begin to appear. The location also should be in full sun and be sure to fertilize the plants every 2 to 3 weeks to encourage bigger blooms.

Hollyhocks come in a variety of colors including pink, red, yellow, purple, white and even black. The flowers can be single, semi-double or double and when they start blooming in July you can expect to have blooms through September. While Hollyhocks are beautiful they are not without their drawbacks. Japanese Beatles love to eat the blooms and slugs/snails will devour the foliage. They are also susceptible to diseases; particularly Hollyhock rust which can cause the leaves to discolor, become deformed and then fall off. You’ll want to avoid watering the leaves themselves if possible and don’t crowd the plants together as air circulation can help prevent diseases. If you do end up having a problem with rust be sure to gather up all of the diseased plant material and throw it out. Don’t put it in your compost pile or you’ll just perpetuate the problem!

Gardeners know it’s never too early to think of next year. August is just around the corner so why not plant some Hollyhocks in your garden now for some beautiful blooms next summer!