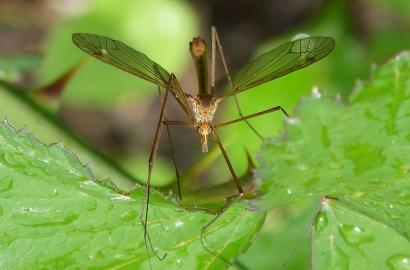 What is the most dangerous creature on earth? Some television programs I’ve watched say it is the hippopotamus and others say that big cats such as lions, tigers, and cougars should own that title. Some might even argue that we humans are more dangerous than all of these but I think a much smaller adversary has earned this distinction and it is one that every gardener should be aware of. My nominee is the mosquito and it’s with good reason.

Mosquitos have killed more people in the world than all the wars in history combined. Mosquitos are responsible for 3 million new cases of malaria each year and due to global trade, serious infectious diseases including Dengue Fever, West Nile Virus and the Zika Virus have found their way to the United States. If this isn’t bad enough mosquitos are attracted to carbon dioxide and sweat so other than not breathing or sweating what’s a gardener to do to protect themselves from these nasty characters?

Even if you never ventured outside your home it is still unlikely that you could avoid an encounter with a mosquito but there are some things you can do to limit your interaction with them:

Eliminate Their Breeding Areas - Mosquitos breed in stagnant water with the young maturing in as little as 4 to 5 days. Destroying these breeding grounds is one way to fight back. This means changing the water in bird baths weekly, aerating ponds and placing barriers such as screens over water barrels.

Avoid Wearing Dark Clothing - In addition, CO2 and sweat mosquitos are attracted to dark objects. Wearing light colors is another way to avoid having them make a meal out of you.

Work When They Don’t - Some breeds of mosquito are active during the day but, most mosquitos are most active in the hours around dusk and dawn. If you can avoid working outdoors during these times of the day you’ll reduce the likelihood that you’ll encounter them in your yard.

Plant Lots of Herbs - Many herbs have oils that repel mosquitos including Rosemary, Mint, Lavender and Lemon Verbena. Rub these on your exposed skin while you are outside and plant them next to your pool, on your deck and by the barbecue in addition to your garden.

Bring in Reinforcements - Mosquitos breed in large numbers because they have a lot of enemies who make a meal out of them. As the saying goes, “Enemy of My Enemy is My Friend” so why not give those enemies of the mosquito an open invitation to make a home in your yard. Bats eat thousands of mosquitos each night so a bat house might be desirable and if you have a pond why not add fish or a turtle to it? A broken clay pot turned upside down can be a nice home for a frog or toad and birds are not just pretty to look at; they feast on mosquitos too!

There are a variety of repellent sprays available as well but why not try some of these techniques to take on this most dangerous creature!