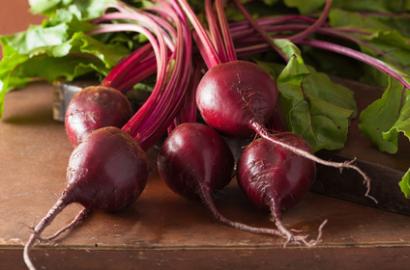 The use of beets as a food source may date as far back as prehistoric times, but it was the greens and not the root itself that were considered to be the most edible part of the plant. It wasn't until Roman times that beets were cultivated with the purpose of eating the root as well as the greens. During the Napoleonic wars, beets became an alternative sweetener to cane sugar which was not readily available in France due to a blockade by the British Navy. It is this use as a sweetener which has sometimes caused people to refrain from eating beets thinking that they are packed with empty calories. In fact, beets have the same amount of sugar as a large carrot and after reading this article you may want to name them as the next “super food.”

Beets grow best in cooler temperatures which make them a great choice for a fall vegetable garden. If you live in areas that don’t get frost you may even be able to grow them as a winter crop. They are not particularly demanding to grow although they prefer loose soil which is easy to cultivate. Beets do best in enriched soil that is not acidic which means you may have to add lime to the planting area if your soil tends to be on the acidic side. They are equally at home growing in a container as they are in a vegetable garden and if you plant the seed in two-week intervals you can have beets to harvest for months. Beet seedlings will need to be thinned when they are about 2 to 3 inches in height and a distance of about 8 inches between each plant should be maintained.

As I referenced earlier beets provide two harvestable plant parts. Once the leaves get to about 4 to 6 inches tall you can harvest them for salads. The greens are similar to spinach and they are highly nutritious. Gardeners usually grow beets for their root which looks like a bulb and should be harvested when they are about 2 inches in diameter. You can eat the beet immediately or store it for several weeks if you can provide a climate with temperatures consistently in the 33 to 35-degree range. If you decide to store the beet you’ll want to remove any foliage which can retain moisture and cause the beet to rot.

Beets are highly nutritious and are loaded with vitamins c and k as well as being a source of iron and folate. Red beets contain anti-oxidants and yellow beets have lutein which promotes eye health. Beets are a source of fiber and are said to promote liver efficiency as well as being an anti-inflammatory. They can be eaten raw in salads and also the centerpiece of your meal; for example, borscht is a hardy soup with a consistency like a stew which is very popular in Eastern Europe. Finally, they can be juiced along with carrots and apples to make a delicious and healthy smoothie.

So, if you want to try the new “super food” in your kitchen this fall try growing beets!