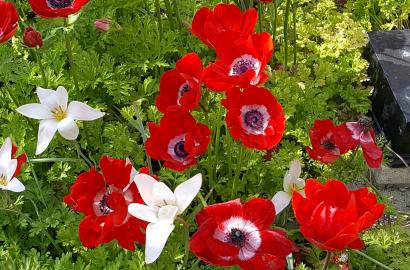 I don’t think I’ve ever seen a bulb that has so many negative undertones associated with it. In Western culture, the Anemone is related to Greek Mythology. The story goes that when Aphrodite took Adonis as a lover the other Gods were so jealous that they murdered Adonis. Aphrodite wept over his grave and Anemone sprouted when her tears hit the ground. During Victoria times Anemone were associated with any kind of lost love and it is viewed as a symbol of bad luck and ill tidings in Eastern cultures. Talk about some bad mojo! Yet, when you see a mass planting of Anemone you can’t help but think they are beautiful.

Anemone is more commonly known as Windflower as it typically blooms with the arrival of spring breezes. While the spring-flowering variety is the most well-known there are Anemone that bloom in the summer and fall too. Their flowers look like a small daisy and come in pink, red, blue and white. It is most frequently planted in the fall and the fern-like foliage of spring-flowering varieties will disappear by summer so you may want to make a mental note or leave a marker so you don’t forget where they are planted.

Anemone are hardy in garden zones 4 through 8 and the bulbs should be soaked for 24 hours before planting them to encourage sprouting. They can be planted to 2 to 3 inches deep and they will reach a height of 4 to 6 inches. In Northern areas, they should be planted in locations where they can get full sun but in Southern regions, they will need some afternoon shade. They are sometimes attacked by slugs and squirrels but otherwise are pest and disease free.

Grecian Windflower is one of the most popular varieties which is very hardy and long-lived. The Mediterranean Windflower is not hardy beyond garden zone 6 but it can be used as a cut flower. Anemone are best planted in groups of at least 25 bulbs and over time they will naturalize like Daffodils do. They typically will flower at the same time as Snowdrops and Crocus as well as some early perennials such as Basket of Gold Alyssum. In addition to mass plantings, they also can be grown in rock gardens as well as containers and Wood Anemone are a good choice for woodland and part shade spots.

Once you get past their undeserved reputation Anemone are one beautiful flower. If you are looking for a new spring-flowering bulb to add to your garden and want to grow something different than the more well-known bulbs why not give Anemone a try?