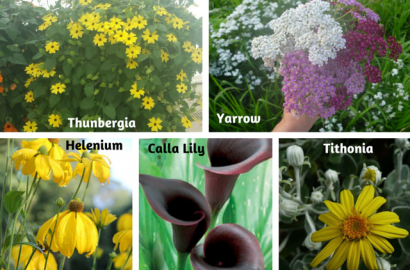 I don’t know about you but I seem to have a running list of things I should be doing but I never get around too. Those would have, could have, should have thoughts also extend to that mental garden checklist in my head and one of the items on that list are all of the new flowers that I’ve never grown before but sure want to try. There is always an excuse for not trying something new. How about, “I don’t have the room for anything new” or “I’m a little nervous about trying something that I haven’t planted before” just to name a few. Well I have a few flowers that I think you’ll want to consider adding to our own list:

Yarrow - This flower is also known as Achillea and is suitable to grow in garden zones 3 through 9. You may be familiar with the tall, yellow variety of this plant but the last few years have seen the introduction of varieties whose size make them suitable for pots and containers. They prefer dry soil conditions and are rarely bothered by pests or diseases. The have fern-like foliage which is quite attractive and their flowers, which can be yellow, red, white or pink, also make a great cut flower for arrangements. Once they start blooming in the late spring they keep going all season long no matter how hot it gets.

Tithonia - Also known as Mexican Sunflower this annual grows up to 6 feet tall on bushy plants that are 2 to 3 feet wide. They may need staking if they are planted in exposed areas that are subject to high winds. The flowers come in shades of orange, yellow and red and the leaves have a velvet-like feel to them. They prefer well-drained, fertile soil in full sun conditions and will require additional watering in dry spells during the summer. Tithonia is not easily found in garden centers so you’ll have to grow them from seed. You can start them indoors about 6 weeks prior to the last frost in your area or you can sow them directly in the ground once the soil has warmed. They are a great cut flower too!

Calla Lily - These lilies are grown from rhizomes which produce dramatic, elegant flowers on long stems. They come in a range of colors including white, red, pink, yellow, green and now even some darker shades. They can be planted 4 inches deep about 12 to 18 inches apart and grow 1 to 3 feet tall producing 6 to 12 flowers during their blooming season. They prefer moist soil in sunny locations but will appreciate some shade in the afternoon. They can be treated like a perennial in garden zones 8 to 10 but in colder zones they can be treated like a dahlia. This means they can be taken out of the ground after the foliage is killed by the first frost and then dried outdoors for a few days so they can be stored over the winter in a cool basement or garage. Once you see these in bloom you’ll know that all of this extra effort is worth it!

Helenium - This perennial is also known as sneezeweed. Similar to Goldenrod it doesn’t really cause hay fever but since it blooms at the same time as ragweed it is mistakenly thought to be an allergen. It starts blooming in mid-summer and will continue into the fall; just when most other perennials have started to lose steam. It grows well in garden zones 3 through 9 and prefers rich, moist soil in full sun locations. It comes in colors such as yellow, orange and red and new varieties are being added all the time. The taller varieties require support to prevent them from flopping but newer varieties grow about 2 to 3 feet tall and generally don’t need such additional support. If you need a late season, rear of the border plant for your garden then this is the plant for you.

Thunbergia - This flower is more commonly called Black-Eyed Susan Vine as the orange, yellow, red or white blooms have a dark center in the middle of the flower. The vine is native to Africa, Madagascar and Southeast Asia and while it looks great in containers or climbing up a trellis it also can be grown indoors too. The leaves are shaped like an arrowhead and the vine can climb up to 8 feet tall. While it can sometimes be found in a garden center the vine is very easy to grow from seed. You can soak the seed in water for 24 hours prior to planting to improve germination rate and you’ll find that it grows quickly as the weather warms in the late spring and summer. While Thunbergia prefers full sun it will benefit from some afternoon shade and it also should be fertilized every 4 to 6 weeks. It also looks great when planted with other vines such as Morning Glory or Purple Hyacinth Vine.

Now that you know about these five flowers maybe you’ll want to try them in your garden this season!